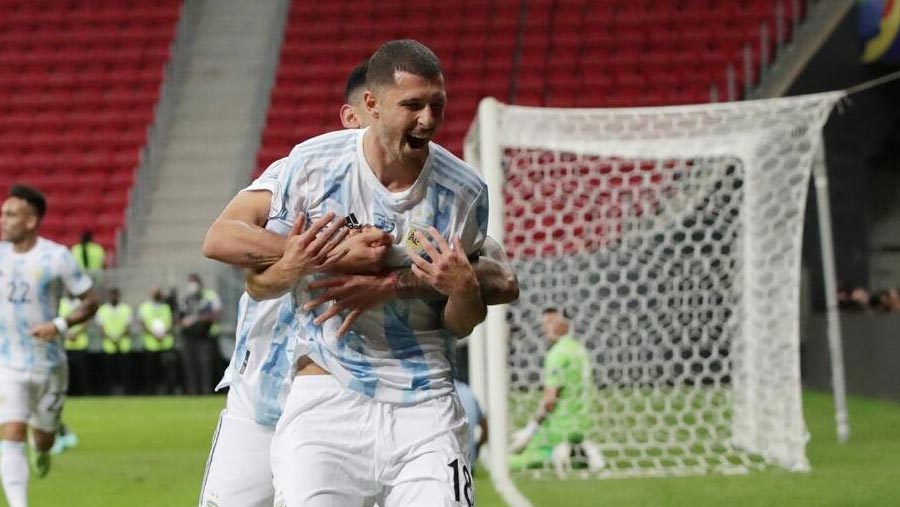 A first half goal from Guido Rodriguez, his first in 11 international appearances, gave Argentina a 1-0 win over Uruguay in a leaden Copa America clash on Friday (Jun 18).

Uruguay hadn't beaten Argentina in the Copa America since 1989 and they went behind early on to Rodriguez's header.

The midfielder was given a starting berth for the first time since June 2019 and he justified that decision when he converted a cross from Lionel Messi after 10 minutes.

The goal gave Argentina all three points and condemned their neighbours to a losing start to their Copa America campaign.

The result in a game that was both end-to-end but lacking in real excitement at a cavernously empty stadium in Brasilia leaves Uruguay joint bottom of Group A with no points, alongside Bolivia, who have played two and lost two.

Argentina move into joint top spot with four points alongside Chile, who beat Bolivia 1-0 earlier on Friday. Paraguay have three points from one game.

Striker Edinson Cavani was back for Uruguay after missing the last two games through suspension and he produced one of the few memorable moments for his side when he was unfortunate to see a loud shout for a penalty waved away in 26 minutes.

It was indicative of Uruguay's unhappy night that although they had slightly more of the possession they never managed a shot on goal the entire match.

At the other end, Messi caused problems for Uruguay with his dribbles in the last third but he was frequently crowded out by Uruguayan defenders.

The result extended Argentina's unbeaten run to 15 games since they lost in the semifinal of the last Copa America in 2019.

Their next game is against Paraguay on Monday, while Uruguay take on Chile the same day.