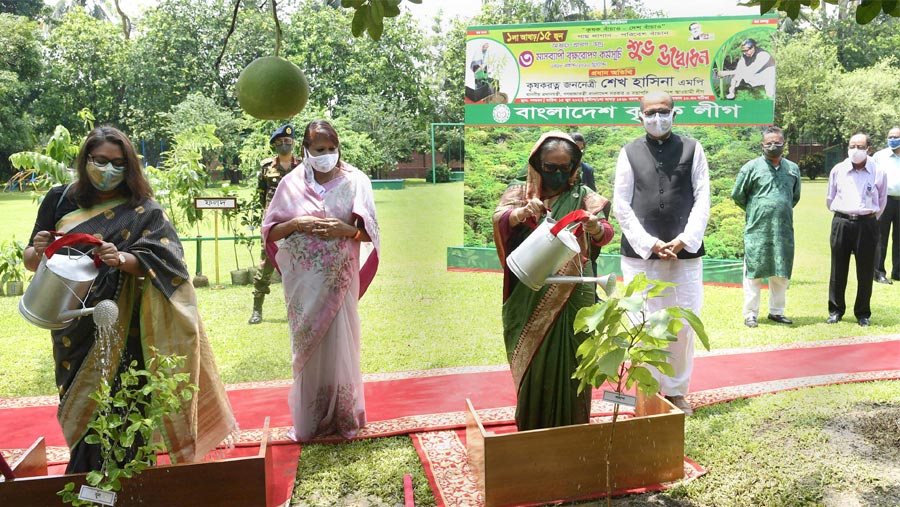 “We are carrying out a social forestry campaign alongside the work of gardening and tree plantation at people’s homes across the country,” she said.

The Premier made this remark while inaugurating the Tree Plantation Campaign organized by Bangladesh Krishok League at her official residence Ganabhaban.

She said, “We want our afforestation would increase alongside ensuring environmental development in such ways... and our country would set an example globally.”

“I urged all of you to plant a timber, a fruit bearing and an herbal tree,” she said, mentioning that the tree would return economic value and protect the environment as well as provide nutrition.

Sheikh Hasina said since 1983, Awami League and its associate bodies have been planting trees in Pohela Ashar (starting of the rainy season) with the initiative of Bangladesh Krishok League.

She also expressed her optimism on a massive tree plantation this year.

The PM said her government wants to carry out the country’s economic development keeping the environment safe and making the green Bangla greener.

“Our all efforts are for that development,” she said, referring to her government’s endeavor of raising afforestation to 22 percent from only 7 percent in 1996.

She said Awami League following the footsteps of Father of the Nation Bangabandhu Sheikh Mujibur Rahman, who made the country independent, always works for the welfare of the nation and its people.

“We want to build the country with the ideology of Bangabandhu and spirit of Liberation War,” she added.