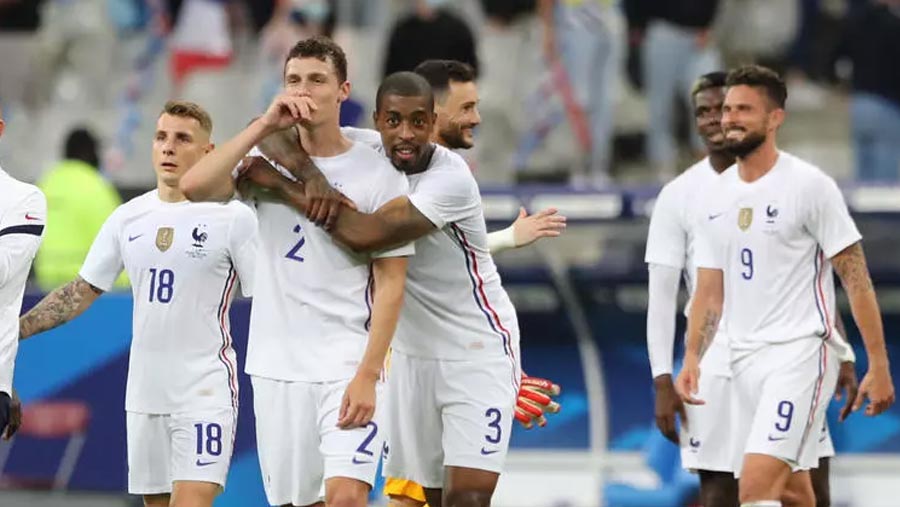 Karim Benzema was forced to leave the pitch with a dead leg on Tuesday (Jun 8) as world champions France beat Bulgaria 3-0 in their final friendly one week before beginning their Euro 2020 campaign.

Benzema was taken off in the 39th minute at the Stade De France in what is France's last match before they take on Germany in their opening Group F match of the European Championship against Germany on Jun 15.

The 33-year-old had been recalled with great fanfare to the national team following a near six-year exile, but his replacement Olivier Giroud showed why Les Bleus are considered among the favourites for the tournament with a second-half brace.

Antoine Griezmann scored the opening goal in front of 5,000 joyous supporters who were also celebrating their return to live football in the stadium.

Fans were allowed in if they had a negative test for Covid-19 within the previous 48 hours or proof they had been completely innoculated for the virus.

The fans were worried when, with France already ahead thanks to Griezmann, Benzema sat down in the middle of the pitch and was checked over by team doctors after having fallen heavily when attempting a header a few minutes earlier.

He then left the field, but France coach Didier Deschamps played down the injury, saying it was a "dead leg".

"He took a good hit on the muscle above the knee," Deschamps told broadcaster M6. "He stopped playing because he felt it hardening... the medical staff are at his side."

Benzema had been sidelined by Les Bleus since 2015 over his alleged role in a blackmail plot involving his former international teammate Mathieu Valbuena. He missed out on France's 2018 World Cup win and their run to the Euro 2016 final on home soil.

Benzema has scored 27 goals for France and was last month named as this season's best French foreign-based player by the country's players' association.

He scored 29 goals last season for Real Madrid, passing 20 league goals in all three seasons since Cristiano Ronaldo left for Juventus in 2018.

A Spain side made up of under-21s players claimed a comfortable win against Lithuania in their final friendly before Euro 2020. No senior players featured after captain Sergio Busquets had tested positive for Covid-19 on Sunday.

However, the youthful Spain side still had too much for their opponents as they led 2-0 at half-time through goals from Hugo Guillamon and Brahim Diaz.

Juan Miranda made it 3-0 before Javi Puado got a fourth late on.

It was also the youngest-ever side fielded in their history, with an average age of 22 years and 102 days.

Spain begin their Group E campaign against Sweden in Seville on 14 June, before playing Poland (Jun 19) and Slovakia (Jun 23).

Poland came from behind twice to salvage a draw in their final Euro 2020 warm-up game against Iceland.

Albert Gudmundsson put Iceland in front with a clever backheel, but Piotr Zielinski’s six-yard finish ensured the teams were level at half-time.

Swiderski came on as a substitute for record goalscorer Robert Lewandowski.

Poland face Slovakia in their Euro 2020 opener in St Petersburg on Monday.