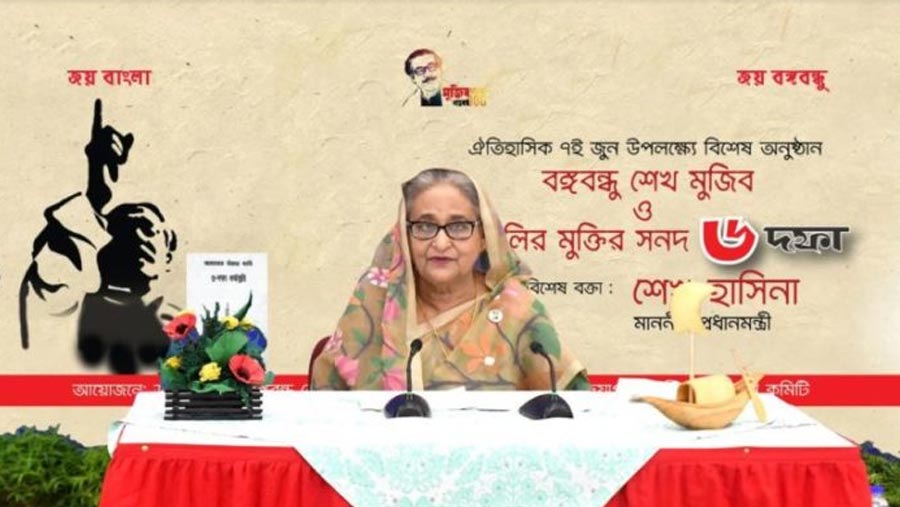 Prime Minister Sheikh Hasina on Monday (Jun 7) said that the country’s independence was achieved on the basis of the six-point formula, the “Charter of Freedom” for Bengalees, and reiterated her pledge to build Bangladesh as a developed and prosperous country with the spirit of the Liberation War.

“We won the election (1970 national election) and achieved the country’s independence on the basis of the six-point demand which actually consisted of one point that was independence. We, the family members, at least knew it, as he (Bangabandhu) always told us that six-point was basically one-point that means independence. Now, we are an independent nation,” she said.

The PM said this in a prerecorded special discussion titled “Bangabandhu Sheikh Mujibur Rahman and Charter of Freedom for Bengalees” held on the virtual platform marking the historic Six-Point Demand Day, as the nation celebrates it every year on Jun 7.

Sheikh Hasina, also President of the ruling Bangladesh Awami League, said that Jun 7 (1966) is very significant for the Bangalee nation and the day was inscribed as a red letter one as eleven people including labour leader Monu Mia sacrificed their lives in Pakistani occupation forces actions while they were enforcing a nationwide hartal demanding realization of the six-point formula and release of the Father of the Nation from the jail.

She quoted Bangabandhu as saying, “In this country, the Awami League first bears the message of every struggle. It is true that they (Awami League leaders and activists) were going through torture. But, the movement didn’t go in vain. The six-point demand will also not fail. We will make the struggle successful through sacrifices. InshaAllah, the victory will be our’s.”

The PM said that the six-point demand was outcome of the thought of Bangabandhu relating to establishing the rights of the East Pakistani people as there were huge discrimination among the East and West Pakistani people in every sector particularly in civil and military jobs.

Another reason for declaring the six-point demand had come to surface during the Indo-Pak war in 1965 when the people of East Bengal or East Pakistan remained totally unprotected as there was no importance to the central government of Pakistan for protecting this region, she went on saying.

She also recalled the contribution of her mother in making the nationwide 7th June hartal success to pursue the six-point demand by organizing the party activists evading the eyes of intelligence agencies in absence of Bangabandhu as he was in jail at that time.

The PM said that the Father of the Nation placed the six-point formula (on Feb 5, 1966) before a meeting of all the opposition parties in Lahore, adding that the meeting did not endorse it and even ignored enlisting it in the agenda while some Bangladeshi politicians did not support it.

She added that Bangabandhu, who announced the six-point as Awami League’s general secretary, later briefed the media about it after calling a press conference in Dhaka.

Bangabandhu later became the President of the Awami League in the party conference on Mar 19 (1996) and started extensive visits from one place to another in the country to make the six-point formula as the demand of the people, she continued.

The Father of the Nation gave speeches in mammoth gatherings in big districts like Mymensingh, Chattogram, Sylhet, Jashore, Khulna and Narayanganj to mould public opinion in favour of the demand, she said, adding that he was accused in a number of cases and was captured time and again following the meetings as the Pakistanis treated it as a move to separate East Pakistan from Pakistan, she said.

The PM, however, said that Bangabandhu who had struggled throughout his life since the childhood for giving a better and improved life to the countrymen for which he took various socio-economic programmes, but could not materialize, as he (Bangabandhu) was assassinated brutally along with most of his family members on Aug 15, 1975.

But, she said, “The Father of the Nation is no more within us. We had lost the ideology of the Liberation War after 1975 which has again returned to us. Bangladesh now stands with dignity keeping its head high (by becoming a developing nation) on the world stage with the ideology of the Father of the Nation. Bangladesh will definitely go ahead and be established as a developed and prosperous “Golden Bangladesh”.”

In this connection, the PM said that Bangabandhu left the country as a least developed one and now it turned into a developing nation, adding, “Bangladesh is marching forward, will continue it in the future as blood doesn’t go in vain.”