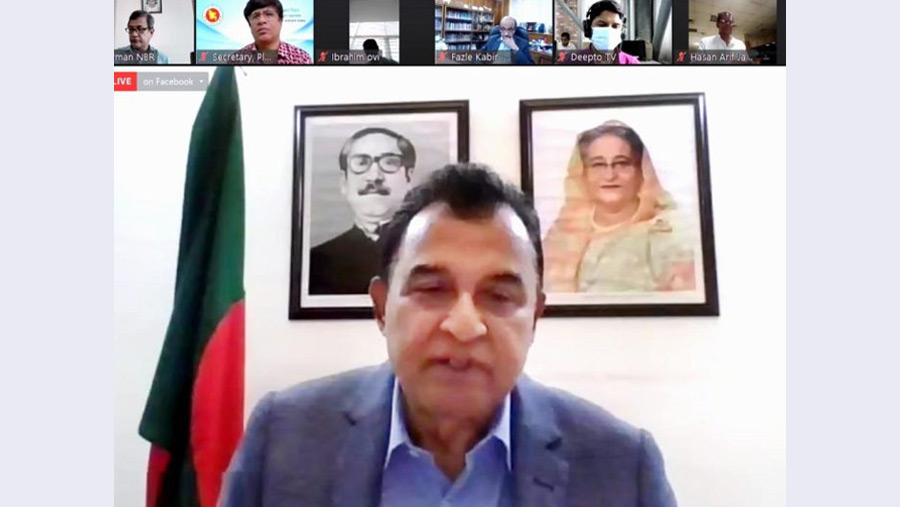 Finance Minister AHM Mustafa Kamal said that the proposed national budget for FY22 would attract new investments, create employments and protect the lives and livelihoods of people despite the shocks of the Covid-19 pandemic.

“We’ve been able to make our economy as business friendly and investment friendly... this proposed budget will attract investments, create employments and protect the livelihoods of the marginal communities,” he said.

Kamal also expressed his hope for achieving targeted 7.2 percent GDP growth rate and even more for the next fiscal year alongside fulfilling the budget deficit of record 6.2 percent.

The Finance Minister said this while addressing a post-budget press conference for FY22 on Friday (Jun 4) through virtual platform, local media reported.

Earlier on Thursday, the Finance Minister placed a Tk 6,03,681 crore budget for FY22 in the Jatiyo Sangsad.

Terming this proposal budget as “business friendly”, he said that no tax was raised in this budget rather tax rates were reduced alongside some exemptions.

Mentioning that it is not the lone goal of the government to generate revenues, Kamal said the government also has to ensure jobs creation where the private sector would play the key role.

“So, we want to put the private sector in the driving seat so that they could move ahead the economy,” he said adding that the entire budget is business friendly as the industrialists and businessmen would be able to continue their production process and businesses availing various government facilities, and thus create employment opportunities.

He said the government is committed towards the businesses as “Made in Bangladesh” tagline has been incorporated in the budget.

The Finance Minister said the government would remain flexible as tax, VAT rates and customs duties would be reduced to maximize revenue generation.

He told another questioner that there was huge reaction over the provision of legalizing undisclosed money in the budget as many have advocated for it and many have also voiced concerns over it.

Kamal said he had received many phone calls over the issue and it has both positive and negative sides. “Let’s see what we can do on it,” he added.

Asked about the allocation against the health sector amid the Covid-19 pandemic, he said that the health sector plays a pivotal role in the entire economic system of the country and it has to be managed effectively and comprehensively.

Supplementing the Finance Minister, Agriculture Minister Dr Abdur Razzaque said financing would not be a problem for the government to face the impacts of Covid-19 as Prime Minister Sheikh Hasina has time and again put priority on protecting the lives and livelihoods of people amid the pandemic.

He also expressed his strong resolve to face the Covid-19 pandemic with the united efforts of the countrymen.

Finance Division Senior Secretary Abdur Rouf Talukder said that the health sector in the proposed budget received 13.3 percent higher allocation than the outgoing fiscal year while the government has allocated Tk 14,200 crore for procurement of necessary vaccines. “If necessary, fund could be available from other sources in this regard,” he said.

Kamal also urged all to play their positive roles in moving forward the economy.

He said that the government is now exploring the alternate sources for vaccines while more doses of vaccines would come to meet the growing demand.

Replying to a question, Kamal said that the government has been able to achieve its fiscal targets over the years.

He told another questioner that the government is yet to get the final data on the latest poverty rate from the Bangladesh Bureau of Statistics (BBS) and once it is available, then it would be possible to make the figures public.

Turning to the GDP growth rate of 7.2 percent for FY22, the Finance Minister said that the platform from which the country has to attain such growth is very strong and Bangladesh is now moving ahead in all major macroeconomic indicators.

About the debt to GDP ratio of the country, he said it is still below 40 percent which it is around 100 percent in China and also almost same in neighboring India.

“So, we’ll be able to bear our budget deficit,” he said adding that the foreign currency reserves in the country rose to $45.1 billion yesterday (Thursday) which was $36 billion in June last year.

“We’re now capable enough... we’ll not only take loans, now time has come to give loans to others,” added Kamal with high confidence.

Replying to another question on whether the government would be able to realize the targeted financing from the foreign sources to meet the budget deficit, Kamal said he does not see any problem in this regard.

Highlighting the good performances of the major macroeconomic indicators, he informed that the revenue collection witnessed an almost 13 percent growth, exports in May saw a growth of 13.64 percent with the July-May export earnings totaling $35.18 billion while the inward remittance flow is likely to hit a record height of $25 billion in this year.

Joining the press conference, the central bank Governor Fazle Kabir ruled out the allegation that the well-off society and the business class are only getting favour from the stimulus packages.

He informed that out of the Tk 40,000 crore stimulus package for the large-scale industries, around 82 percent or Tk 32,625 crore have so far been disbursed among some 3,257 beneficiaries.

Out of the Tk 20,000 crore stimulus package for the CMSMEs, he informed that so far around 73 percent or Tk 14,741 crore have been disbursed.

Besides, the Bangladesh Bank Governor said that out of the Tk 5,000 crore stimulus package for the agriculture sector, around 79.9 percent or Tk 3,996 crore have so far been disbursed among some 1,72,390 beneficiaries.

Planning Minister MA Mannan said that the government has been able to maintain the positive trend in placing the budget for the last 13 years and it would not be deviated from its positive growth path.

Agriculture Minister Dr Abdur Razzaque said that the allocation against the agriculture sector has not declined in the next fiscal year while the government would focus on commercialization and mechanization of agriculture.

He also informed that tax has been raised on import of food items to encourage the local entrepreneurs as the government wants to ensure food security of the country’s people of its own. Besides, there is high export potentials for local agro processed items, he added.

GED member of the Planning Commission Dr Shamsul Alam said that there is no reason to be concerned over the current tax-GDP ratio.