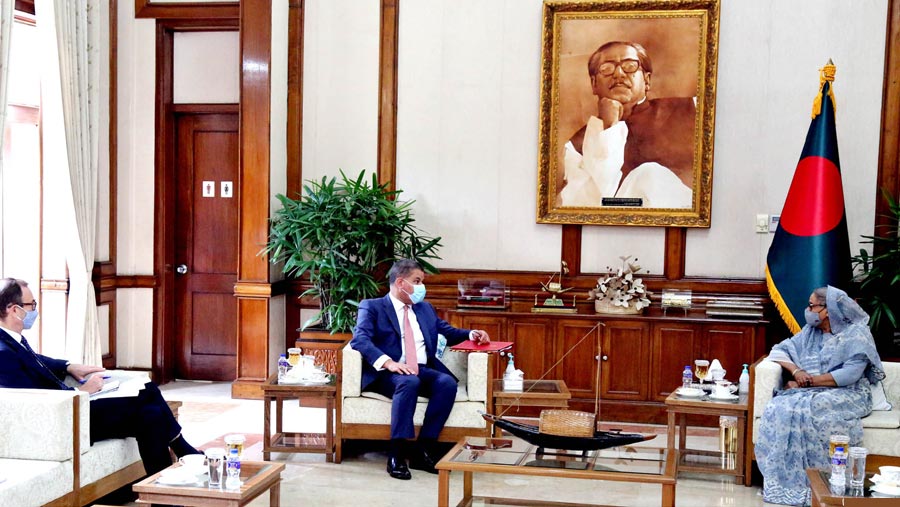 Prime Minister Sheikh Hasina on Wednesday (Jun 2) said Bangladesh expects that the United Kingdom will promote the interest and priorities of climate vulnerable countries to the international platforms. The premier passed this remarks while visiting UK’s Member of Parliament and COP-26 President-designate Alok Sharma called on her at her official residence Ganabhaban in Dhaka.

“As the current Chair of Climate Vulnerable Forum-CVF, Bangladesh expects UK to promote the interest and priorities of climate vulnerable countries to the international platforms,” said the PM.

Quoting PM Sheikh Hasina, he said Bangladesh and some other countries will be affected highly due to the adverse impact of global climate change, although Bangladesh’s carbon emission is very much nominal.

During the meeting, Alok Sharma hoped that as the CVF chair, Bangladesh under the leadership of Prime Minister Sheikh Hasina would play an important role on the climate change. They discussed about climate fund and other issues, said Karim.

Regarding the Covid-19 vaccination programme, Alok Sharma said, the vaccination is going on well in the United Kingdom.

About Covid-19 and vaccination, Sheikh Hasina said, the government has adopted various measurers to keep economy of the country running apart from containing coronavirus although Bangladesh is a densely populated country.

She briefed Alok Sharma about the Sundarbans as he is scheduled to visit the world’s largest mangrove forest.

The COP-26 President-designate invited Sheikh Hasina to join COP-26 Conference to be held in Glasgow in November.