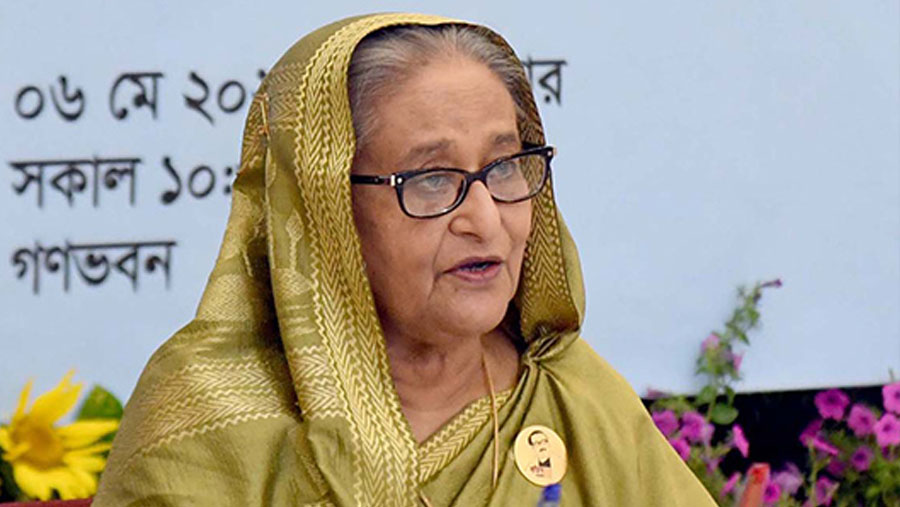 Prime Minister Sheikh Hasina today urged the people to celebrate the forthcoming Eid-ul-Fitr at their present locations to stop the further spread of coronavirus (Covid-19) throughout the country.

“Traveling may expedite the spread of coronavirus further. So, my request to all of you is for maintaining health safety protocols and refraining from traveling if it is not obligatory,” she said.

The premier was addressing the launching ceremony of different types of vessels of the Shipping Ministry and house handover under the rehabilitation project at Paira Port, joining virtually from her official residence Ganabhaban, local media reported.

Referring to the government’s measures to limit movements, she said “Whenever people go to any place from their existing location, they could infect other people with Covid-19 and thus life would be endangered. And that is why movement has been restricted.”

“You all would get the opportunity to meet your near and dear ones if they survive from this deadly virus attack,” she added.

In addition, the government is also trying to help the people continue their socioeconomic activities in a limited scale following the health safety protocols, Sheikh Hasina said.

The PM said coronaviurs has really created difficulties for the country’ people, but the government is trying to stand beside them with assistance.

She also mentioned that the cash support of Tk 2,500 each was provided to 36.50 lakh families who are affected most such as the poor, temporary jobless people, destitute, day-labourers, rickshaw- and van-pullers, transport workers, transgender people, beggars and a few others in urban and rural areas.

Principal Secretary to the PM moderated the ceremony from Ganabhaban while State Minister for Shipping Khalid Mahmud Chowdhury chaired it from the ministry office at Secretariat.

Shipping Secretary Mohammed Mezbah Uddin Chowdhury delivered welcome address. A documentary on the activities of the Shipping Ministry and its subordinate organizations was screened at the ceremony.

Besides, on behalf of the Prime Minister, Mahibur Rahman, MP, and Kaniz Sultana, MP handed over the document of houses to the rehabilitated people at the Paira Port end.

About the passengers’ safety in waterway communication, the PM urged the operators, businessmen and passengers of the vessels to remain careful and vigilant over their safety and lives.

“Passengers’ safety has to be considered by those who run or operate the vessels. Besides, the passengers themselves will have to be careful about their own safety,” she said.

Sheikh Hasina said sometimes vessels fall in accidents and people lose lives due to carrying passengers beyond the capacity. “So, all will have to be careful and vigilant to this end,” she added.

She emphasized on bringing all the vessels under the registration system, as it creates problems to identify the vessels in the time of compensation process due to lack of registration.

“If we can run vessels giving the operators appropriate training, the occurrence of accident will go down,” she opined.

The primer urged all not to allow excess passengers on board as it is indispensable for their safety. “Think once about the pain of those who remain alive losing their dear ones. So, you’ve to keep patience,” she added.

“I would like to request all – both passengers and operators – to remain careful,” she continued.

Briefly highlighting the development carried out by her government in this sector, the Prime Minister said the government wants to revive the waterways communication as a strong means of transportation.

She said the country has over 24,000km of waterways but nearly 6,000km would have been used and later that reduced to half in the dry season.

Sheikh Hasina criticized the governments that had ruled the country after the association of Father the Nation Bangabandhu Sheikh Mujibur Rahman as they put concentration on the business of bus and truck ruining the waterways communication.

She said Bangladesh is a delta and that is why the government has adopted “Delta Plan-2100” to develop it overall.