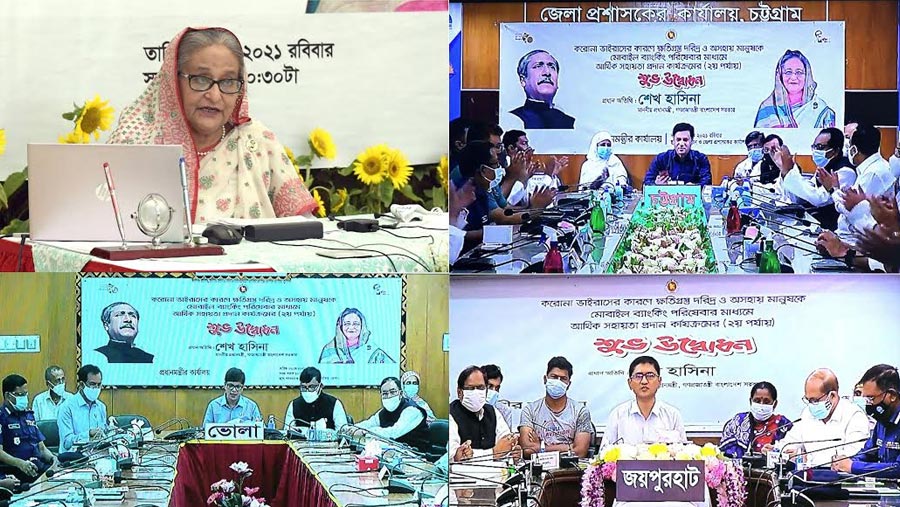 Prime Minister Sheikh Hasina today launched the second phase of cash support disbursement among 36.50 lakh families hit hard by the second wave of the coronavirus pandemic in the country. The premier joined the inauguration ceremony virtually from her official residence Ganabhaban where the district administrations of Chattogram, Bhola and Joypurhat were connected, local media reported.

Each beneficiary family is receiving Tk 2,500 as Eid gift from the Prime Minister in this pandemic gripped difficult time and a total amount of Tk 912.50 crore has been allocated for it.

Speaking on the occasion, the Prime Minister said Awami League, established by the Father of the Nation Bangabandhu Sheikh Mujibur Rahman, always stands beside the country’s people whenever it remains in power or in opposition.

“Our (Awami League) all endeavors are how could we stand beside the destitute people and we are continuing our efforts,” she said.

Sheikh Hasina said following the footsteps of Bangabandhu, the Awami League always wants to stand beside the people and serve them in their bad time.

She mentioned that Bangladesh Chhatra League, Jubo League, Krishak League, Swechasebak League and other associate bodies of Awami League have stood beside the people in their every necessity in this Covid-19 situation such as medical treatment, taking sick people to hospital, funeral, supplying food to people’s house, paddy harvesting and so on.

The premier said many people wanted strong opposition party in the country. The Awami League was also in the opposition and then it worked for people and rushed to the people during any disaster, she added.

She questioned where the opposition party is at this time of disaster though that party tries to oust the government through statements and arson attacks regularly.

In the first day, a total of 22,895 families have received Tk 2,500 each like previous year (first wave of Covid-19) with Eid greetings of Prime Minister Sheikh Hasina. And the remaining families would receive it within May 5.

In the cash support disbursement ceremony, the PM talked to the connected virtually beneficiaries in Bhola, Joypurhat and Chattogram districts.

Regarding the Covid-19 vaccine, the Prime Minister reiterated that her government will procure vaccines at any cost to protect people from coronavirus.

Sheikh Hasina said the government is carrying out inoculation campaign to vaccinate the country’s people.

She said the government is procuring each dose of the vaccine spending much money, but providing it free of cost to protect the people.

The premier reiterated her call to the people to follow the health safety protocols strictly for the wellbeing of themselves and others to stay away from the deadly virus infection even after being inoculated.

As the second wave of Covid-19 began, the PM directed the officials concerned to take several humanitarian assistance measures. To this connection, over Tk 1,500 crore has already been allocated to stand beside the destitute and vulnerable people in this difficult time.

When the Covid-19 lockdown was enforced since Apr 14, marginalized people like the temporary jobless persons, destitute, day-labourers, rickshaw and van pullers, transport workers, transgender people, beggars and a few others in urban and rural areas have been passing life in difficulties.

As per the PM’s directive, the Disaster Management and Relief Ministry instantly provided Tk 590 crore to field-level administrations to extend support to the needy people and the disbursement of the money is continuing, said officials earlier.

Besides, the PM also allocated Taka 10.50 crore against the deputy commissioners (DCs) from her relief and welfare fund to provide emergency assistance to the poor and destitute, they said.

In addition, the Prime Minister at her own initiative has provided Taka 10 crore to the Journalist Welfare Trust as assistance for the journalists who are facing hardships due to the fallout of the pandemic.

Earlier last year, when the first wave of Covid-19 hit the country, the PM provided cash support of Tk 2,500 each to 36.50 lakh poor families and vulnerable groups across the country.

Moreover, the PM has already announced a total of 23 stimulus packages of Tk 124,053 crore alongside taking initiative of maintaining uninterrupted output in the factories and boosting agriculture production.