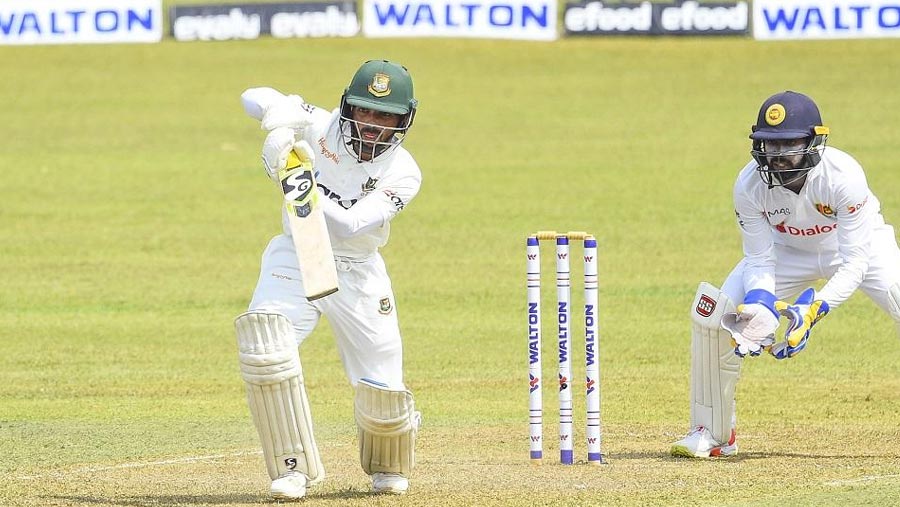 The first Test between Bangladesh and Sri Lanka predictably ended in a draw at the Pallekele International Cricket Stadium in Kandy on Sunday (Apr 25).

The fate of the match was sealed when a spell of shower ruined the possibility of the starting the game after the Tea break on day five.

Tamim who went to tea with 74, raising the prospect of his 10th century, was left disappointed. He led Bangladesh to 100-2 in the second innings, with skipper Mominul Haque on 23.

Only 17 wickets were dropped over the five days, demonstrating how batting-friendly the wicket was.

Skipper Dimuth Karunaratne led the charge with his maiden double as he struck a brilliant 244 off 437, clobbering 26 boundaries. He was ably supported by Dhananjaya de Silva who hammered 291-ball 166, an innings laced with 22 fours.

The duo shared 345-run for the fourth wicket stand and in the process they kept Bangladesh wicket-less throughout the whole fourth day.

The Tigers, however, got the breakthrough in the first hour of the fifth day when Taskin Ahmed rattled the stump of Dhanajaya. Shortly after that he also took the prized scalp of Karunaratne, who looked utterly set for his maiden triple century also.

Taskin was the most successful bowler for Bangladesh with 3-112 while Taijul Islam took 2-163.

Mominul Haque, who made 127 in the first innings stopped the rot while Tamim seemed to play on a different surface as he plundered bowlers in T20 cricket more in all corners of the park.

After being out on 90 in the first innings, Tamim unleashed his beast mood in the second innings and looked unstoppable.

Such was his aggression that when reached his 30th half-century, driving Vishwa Fernando for boundary through extra-cover region off 56 balls, Bangladesh was 52-2. Mominul was then on 1 after playing 30 balls.

Tamim so far struck 10 fours and three sixes in his knock in which he played 98 balls. Only a rain or bad light could stop Tamim and here finally it happened to deny his well-deserved century.

Lakmal claimed 2-21 for Sri Lanka in the second innings.