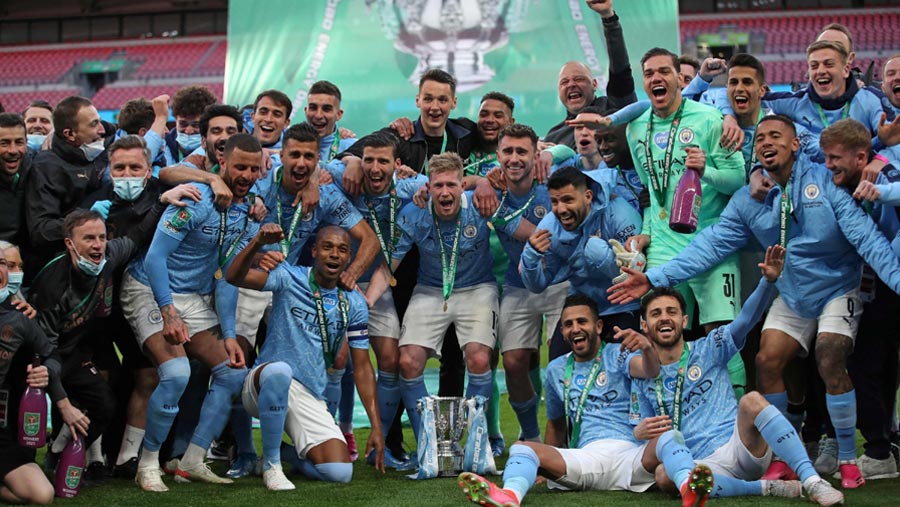 Manchester City have won the League Cup for four years in a row after beating Tottenham Hotspur 1-0 at Wembley on Sunday (Apr 25).

Manchester City won the League Cup for a record-equalling fourth time in succession with a deserved victory over a disappointing Tottenham Hotspur side at Wembley.

Man City defender Aymeric Laporte, arguably fortunate to be on the pitch after escaping a yellow card in the first half before being cautioned after the break, rose above Spurs substitute Moussa Sissoko to head home Kevin de Bruyne's free-kick eight minutes from time.

It was appropriate reward for City creating a host of chances and dominating Spurs, who did not enjoy any sort of positive reaction from sacking manager Jose Mourinho on Monday and replacing him with caretaker Ryan Mason.

The final was played in front of 8,000 supporters, including 2,000 from each club – and it was a delight to hear noise inside Wembley’s vast arena once more.

City’s victory equalled Liverpool’s achievement in the early 1980s of winning the competition four years in a row, as well as matching the Reds’ overall tally of eight triumphs, and manager Pep Guardiola said his players are motivated by such milestones.