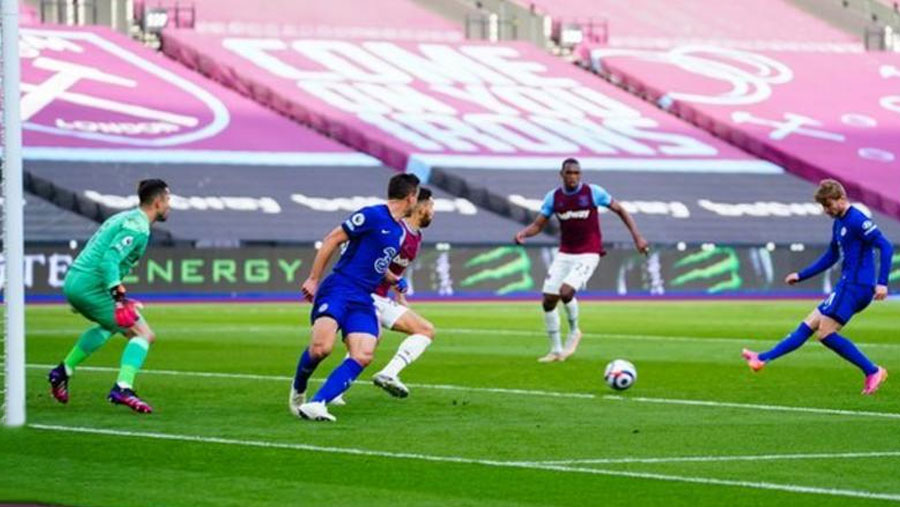 Timo Werner scored for the first time in seven Premier League matches as Chelsea earned a vital three points in their quest for Champions League football as they beat 10-man West Ham United 1-0 on Saturday (Apr 24).

West Ham’s job was made more difficult when Fabian Balbuena was sent off 10 minutes before the end.

Chelsea and West Ham are both vying for a Champions League spot and with Liverpool dropping points against Newcastle United earlier in the day, a result for either team at the London Stadium became even more important.

The result leaves Thomas Tuchel’s side in fourth place, three clear of West Ham and four clear of Liverpool.

Werner, who has struggled at Chelsea since joining them last summer from RB Leipzig, scored a well-worked team goal after 43 minutes.

The Germany international took the ball out of the midfield and played it out left to Christian Pulisic. Ben Chilwell then squared the ball into the box for Werner who powered his shot past Lukasz Fabianski.

The goal came against the run of play with West Ham not dominating in possession but looking strong in defence.

Werner could have had a second approaching the hour mark but he skewed his shot wide rather than chipping it over Fabianski.

A VAR check on 81 minutes showed that Balbuena had raked his studs down Chilwell’s leg in a poor tackle and he was sent off.