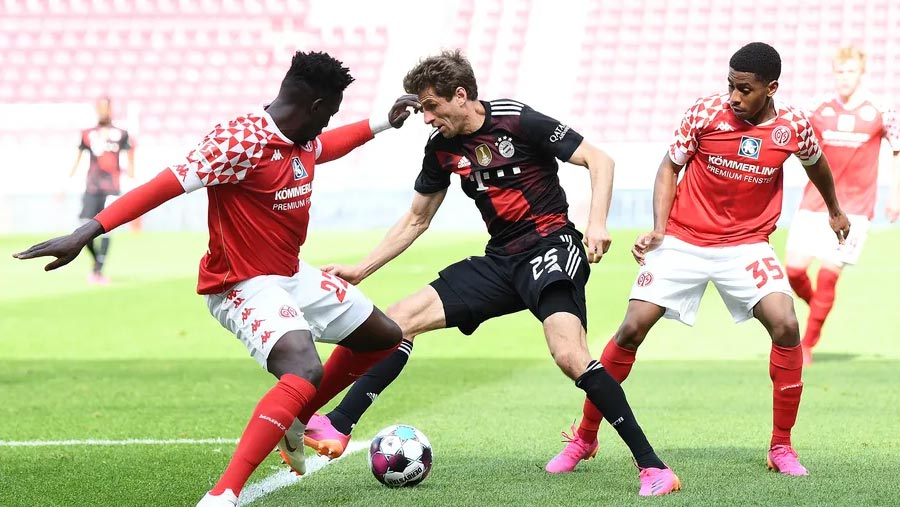 Bayern Munich must wait to be confirmed as Bundesliga champions for the ninth season in a row after they suffered a surprise defeat at Mainz. The league leaders need just one win from their remaining three games to seal the title.

Bayern Munich squandered their first chance to seal the Bundesliga title when they lost 2-1 at Mainz on Saturday (Apr 24) and will now have to wait for RB Leipzig’s game on Sunday to see whether they have clinched their 31st German league crown.

Jonathan Burkardt stunned the visitors after three minutes, turning at the edge of the box to score as Mainz enjoyed a powerful start, twice hitting the woodwork in the first 18 minutes with the Bavarian defence in complete disarray.

The in-form hosts, unbeaten now in their last seven league games, got a deserved second goal in the 37th when Robin Quaison drilled in a header from a free kick.

The Bavarians took control of the game after the break but created far too few chances until top striker Robert Lewandowski scored his 36th goal of the campaign, after returning from four weeks out with injury, with the final kick of the game.

Bayern, who have three games left, are on 71 points, 10 clear of Leipzig, who play VfB Stuttgart on Sunday. The Bavarians will be champions if Leipzig lose.