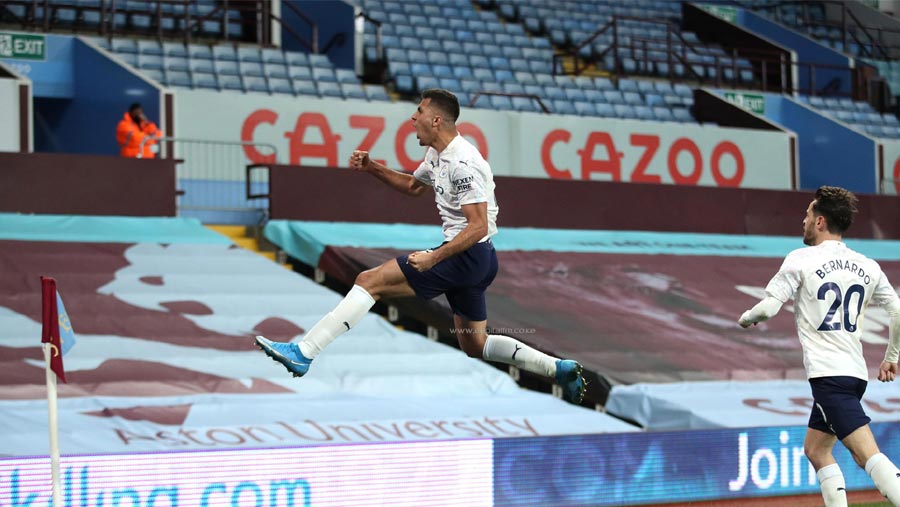 Manchester City closed in on the Premier League title as the leaders fought back to win 2-1 at Aston Villa on Wednesday (Apr 21) in their first match since withdrawing from the European Super League.

Pep Guardiola’s side were rocked by John McGinn’s opener for Villa after just 20 seconds. But City recovered impressively as Phil Foden equalised before Rodri put the visitors ahead.

City defender John Stones threatened to derail his team’s charge when he was sent off for a reckless foul on Jacob Ramsey just before half-time. However, Villa were reduced to 10 men as well when Matty Cash earned a second booking for chopping down Foden in the second half.

Man City are 11 points clear of second placed Manchester United and need a maximum of eight points from their remaining five games to clinch a third Premier League title in four seasons.

City’s bid for an unprecedented quadruple was shattered in Saturday’s FA Cup semi-final defeat against Chelsea. That loss, coming a week after 10-man Leeds won at the Etihad Stadium, raised the possibility of a remarkable late-season collapse from a City side who led the table by 17 points just a few weeks ago. But their gritty display at Villa Park was a big step towards the title given their remaining fixtures feature few daunting tests.

Before returning to the title race, City face Tottenham Hotspur in the League Cup final at Wembley on Sunday and then travel to Paris Saint Germain for the Champions League semi-final first leg next week.

City’s bid to win the Champions League for the first time is unlikely to have much neutral support after their involvement in the failed European Super League.

Guardiola had criticised the controversial plan prior to City becoming the first club to withdraw on Tuesday evening.

Asked to comment for the first time since the competition’s collapse, Guardiola told Sky Sports: “The decision is made from all the English clubs, well done. Come back to the football.”

Relieved to be able to focus on football again, Guardiola made eight changes from the loss to Chelsea, with Kevin De Bruyne absent as he recovers from foot and ankle injuries.

Ollie Watkins flicked his cross into McGinn’s path and the midfielder guided a clinical finish past Ederson from 12 yards. But Guardiola’s team had won their previous 16 away games in all competitions and they responded emphatically.

Riyad Mahrez’s stinging strike was repelled by Villa keeper Emiliano Martinez before Foden equalised in the 22nd minute. Foden drilled a pass to Mahrez on the edge of the Villa area and the Algerian picked out Bernardo Silva’s over-lapping run. Silva’s low cross reached Foden eight yards out and the England playmaker planted a cool finish past Martinez.

The 20-year-old’s third goal in his last five games was the prelude to a period of sustained City pressure.

City’s dominance was rewarded in the 40th minute as Silva dinked a cross towards Rodri and the Spanish midfielder glanced his header over the out of position Martinez from close-range.

Peter Bankes gave a booking but after consulting the pitchside monitor the referee ruled it was a red card offence, sparking a furious reaction from Guardiola as he berated fourth official Anthony Taylor.

Guardiola’s frustrations began to ease when Cash, booked moments earlier, saw red for a crunching foul on Foden in the 57th minute.

That was the signal for City to go into game-management mode as they kept Villa at bay for a priceless win.