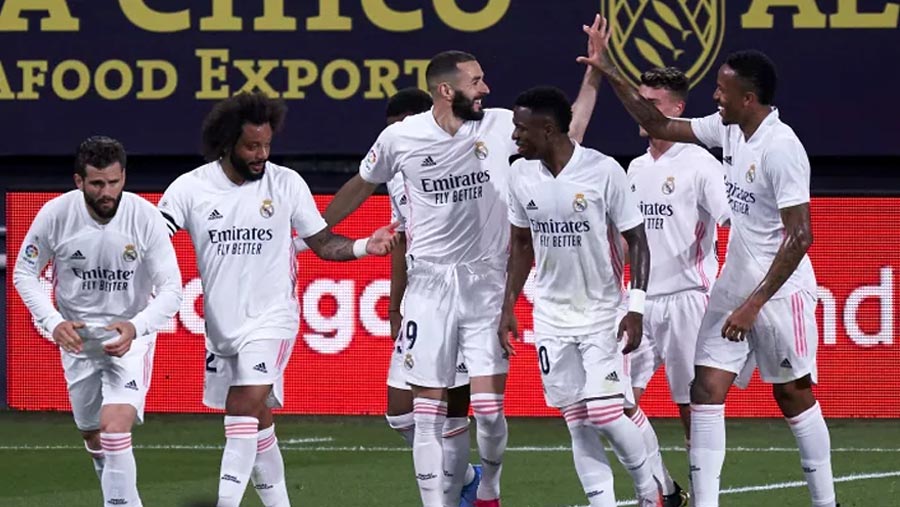 Karim Benzema’s brace and an Alvaro Odriozola header gave Real Madrid a 3-0 win over Cadiz on Wednesday (Apr 21) night, temporarily moving Los Blancos ahead of Atletico at the top of La Liga.

Real Madrid went level on points with Atletico Madrid at the top of La Liga with a win at Cadiz in a week dominated by the announcement and seeming collapse of the European Super League.

There were fan protests outside the ground against the new league, which Real had intended to compete in.

Inside, the visitors ran riot, sealing the win with three first-half goals.

Karim Benzema scored twice – the first a penalty – and provided the assist for Alvaro Odriozola to head in.

The result gets Real’s La Liga challenge back on track after the minor slip in drawing 0-0 at Getafe on Sunday.

It was on the same evening that they and 11 other leading European clubs were announcing their plans to form a breakaway Super League – a project that has seemingly now collapsed just three days later.

Real president Florentino Perez has been one of the most vocal advocates of the proposed competition, telling Spanish TV show El Chiringuito de Jugones that it had been devised “to save football”.

Real have still yet to announce their withdrawal from the Super League, despite the majority of the rest of the clubs doing so, including all six English sides.

They will certainly qualify for next season’s Champions League, but they are currently in a fascinating four-horse race at the top of La Liga to decide if that will be as Spanish champions.

With Benzema firing they certainly have a good chance.

The French striker coolly slotted in his penalty, after VAR was used to rule on the illegality of Isaac Carcelen’s trip on Vinicius Junior.

He then swung over a perfect cross for Odriozola to head the second before nodding in the third himself from Casemiro’s cross – all three goals coming in the space of 10 minutes.