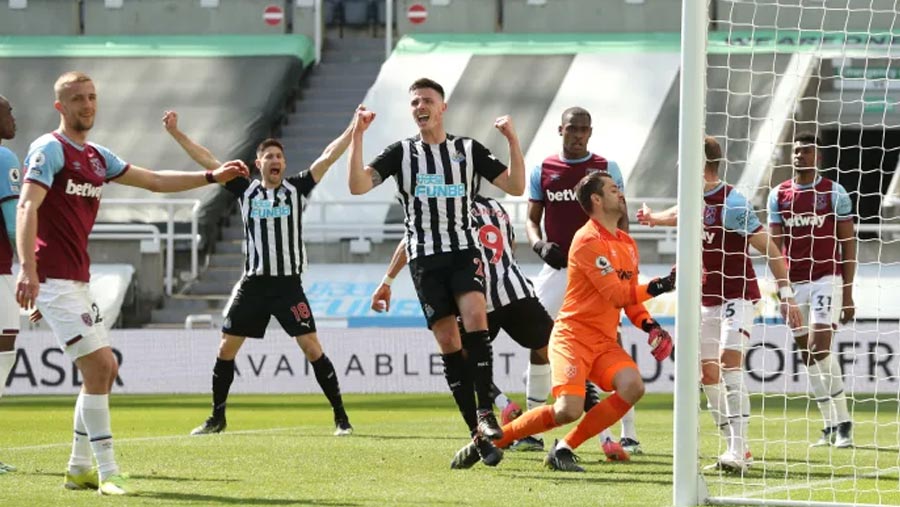 West Ham United’s top-four hopes were dealt a big blow as Joe Willock’s late header earned Newcastle United a 3-2 win in a see-saw clash on Saturday (Apr 17) – a result that put the hosts within sight of Premier League safety.

Newcastle took a big step towards securing their Premier League status with a dramatic win against 10-man West Ham.

Issa Diop’s own goal and a Joelinton tap-in had put the hosts in a commanding position at the break. However, West Ham, who had Craig Dawson sent off for two first-half bookings, drew level from a Diop header and a Jesse Lingard penalty that was awarded after a VAR review.

But with the visitors seemingly on top, Newcastle had the final say, substitute Joe Willock heading an important winning goal that lifts Steve Bruce’s side up to 15th in the table, with a nine-point cushion to the bottom three.

West Ham remain fourth but have now played a game more than fellow Champions League hopefuls Chelsea and Liverpool, who will have the opportunity to leapfrog the Hammers before they play again.

David Moyes’ side had arrived in the north-east of England looking for a third consecutive win but were ultimately punished for a sluggish first half in which they conceded twice and had Dawson sent off.

Prior to his dismissal Dawson’s heavy touch saw him clatter Joelinton, allowing the impressive Allan Saint-Maximin to race clear and fire in a shot that Hammers goalkeeper Lukasz Fabianski and defender Diop contrived to turn into their own goal.

Dawson, who had been booked earlier for a foul on Joelinton, received his second yellow card in the aftermath and was dismissed.

To compound matters Fabianski dropped a simple catch from a corner five minutes later to present Joelinton with a tap-in for Newcastle’s second.

However, the visitors improved after the break and were unfortunate not to claim a share of the spoils in a thrilling finale.