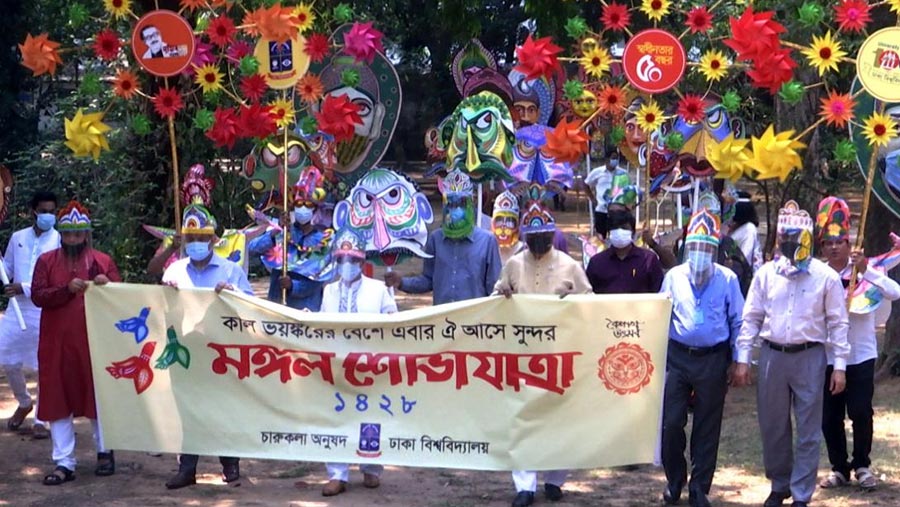 The Bengalese across the country on Wednesday (Apr 14) celebrated this year’s Pahela Boishakh, the first day of Bangla New Year in different mode, basically using virtual media and digital devices by staying at homes due to coronavirus scare.

Pahela Boisaikh, one of the largest universal festivals of the nation was welcomed by the people of all strata staying at homes as the government urged all citizens to do so like previous year (2020) in the wake of the deadly Covid-19 pandemic.

Pahela Boishakh is one of the most colourful festivals through which the Bangalis bid farewell to the old year and welcome the New Year, but this year all programmes were cancelled due to Covid-19 outbreak that has already claimed a lot of valuable lives across the globe including Bangladesh.

The government gave directives to all to celebrate the festival in digital method to avoid public gatherings.

This year, the Bengalese welcomed the Bengali New Year ‘1428’ by taking traditional food items including Panta Ilish (watered rice and Hilsha fish) in the morning while other Bengali foods were also cooked at homes to celebrated the festival.

Nowadays, social media activities become a part and parcel of any kind of celebration in Bangladesh like the entire world.

They conveyed greetings to their loved and dear and near ones through messages on mobile phones and social media as well.

Ministers, politicians, cultural and social personalities and celebrities were seen greeting people on the occasion of Pohela Boishakh on social media.

On this special occasion, people from all walks of life generally wear traditional Bengali dresses.

Young women wear white sarees with red borders and adorn themselves with bangles, flowers, and tips, while men wear white pyjamas and panjabi or kurta.

But this time, the citizens celebrated the festival at their respective homes.

Traditional Mongol Shovajatra was brought out this year in a symbolic way under the auspices of Fine Arts Faculty on the Dhaka University.

Considering the pandemic situation and lockdown, a short symbolic procession (Mongol Shovajatra) was organized on the faculty premises with various masks and symbols made by the artists of the Faculty of Fine Arts following the health safety guidelines and other rules and maintaining physical distance.

President Md. Abdul Hamid and Prime Minister Sheikh Hasina gave separate messages greeting the countrymen on the occasion of Pohela Baishakh on Tuesday. They urged all to celebrate the Bangla New Year in digital method staying at homes to avoid public gatherings. They wished peace, happiness and prosperity of the people and the country in the New Year.

Some historians attribute the Bengali calendar to the 7th century king Shashanka, which was later modified by Mughal emperor Akbar for the purpose of revenue collection.

During the Mughal rule, land taxes were collected from Bengali people according to the Islamic Hijri calendar. This calendar was a lunar calendar, and its new year did not coincide with the solar agricultural cycles.

Akbar asked the royal astronomer Fathullah Shirazi to create a new calendar by combining the lunar Islamic calendar and solar Hindu calendar already in use, and this was known as Fasholi Shan (harvest calendar).