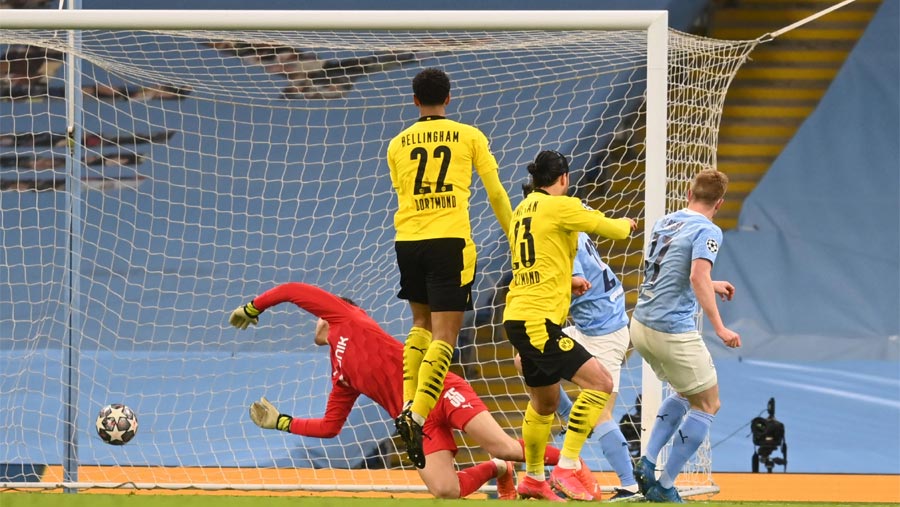 Manchester City’s Phil Foden grabbed a last-minute winner as they beat Borussia Dortmund 2-1 in their Champions League quarter-final first leg on Tuesday (Apr 6) after Marco Reus had netted a late equaliser for the German visitors.

City took a 19th minute lead with a classic counter-attacking move finished off by Kevin De Bruyne after Dortmund's former Liverpool midfielder Emre Can had given the ball away on the halfway line.

Pep Guardiola’s City side then had a penalty awarded but correctly overturned by VAR after a challenge by Can on Rodri and Dortmund, buoyed by the reprieve, found some attacking verve.

Romanian referee Ovidiu Hategan was at the centre of things again when City keeper Ederson hesitated and Dortmund’s Jude Bellingham nipped in and slotted the ball into the net but the 17-year-old was harshly ruled to have fouled the Brazilian.

Ederson came to City's rescue early in the second half, saving from Erling Haaland with an outstretched foot as the German side continued to cause City problems.

City had several chances to extend their lead and paid the price for their uncharacteristic lack of precision in front of goal when Dortmund struck six minutes before the end.

Haaland’s clever pass on the half-turn found Marco Reus, who had timed his run perfectly and beat Ederson with a composed finish.

But then Foden, who had been wasteful twice in the second half, made amends with a clinical finish from close range after being set up by Ilkay Gundogan.