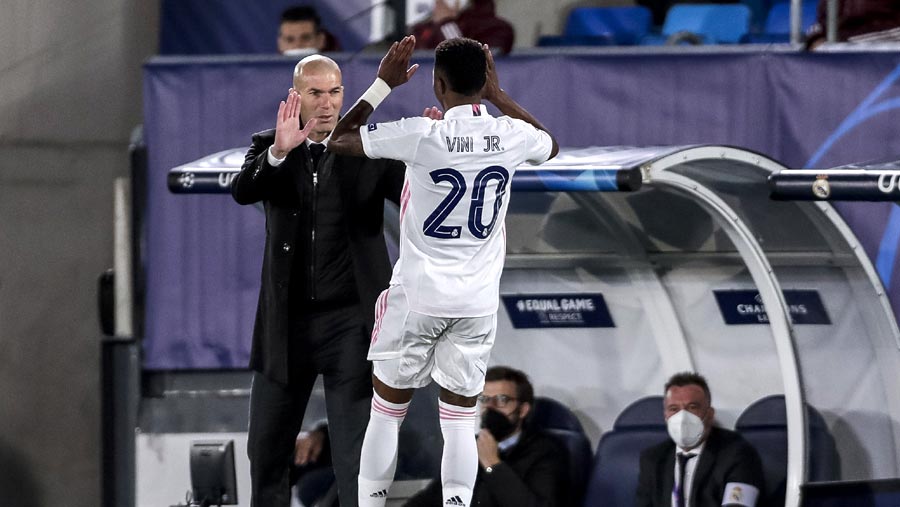 Twenty-year-old Vinicius Junior scored a brace as Real Madrid defeated Liverpool 3-1 in the first leg of their Champions League quarterfinal tie in Madrid on Tuesday (Apr 6).

The Brazil international’s goals in the 27th and 65th minute sandwiched strikes from Marco Asensio and Mohamed Salah to hand Zinedine Zidane’s men a sizable advantage heading into the return leg next week.

Madrid went in front just before the half-hour mark when a sprinting Vinicius chested and fired home from a sublime Toni Kroos long ball behind the Liverpool defence.

The goal marked the former Flamengo man's first in the Champions League knockouts. He also became the second-youngest player to score a UCL knockout goal for Real Madrid at 20 years and 268 days, and youngest since Raul in 1996.

Madrid dominated the next exchanges and doubled the lead with help of a ghastly error by Liverpool right-back Trent Alexander-Arnold who, when racing Vinicius to a lobbed through ball down the left, inexplicably played a ball into the path of Asensio with only the keeper to beat.

Asensio’s strike – a chip over Alisson before smashing home into an empty net – marked the fourth straight match in which the winger has scored in all competitions.

Salah pulled a goal back early in the second half when he slotted home from the middle of the box after a blocked Diogo Jota shot fell to him behind the Madrid defence.

While Liverpool pushed, they couldn't find another goal and will now have a steep hill to climb in the Apr 14 return match at Anfield.