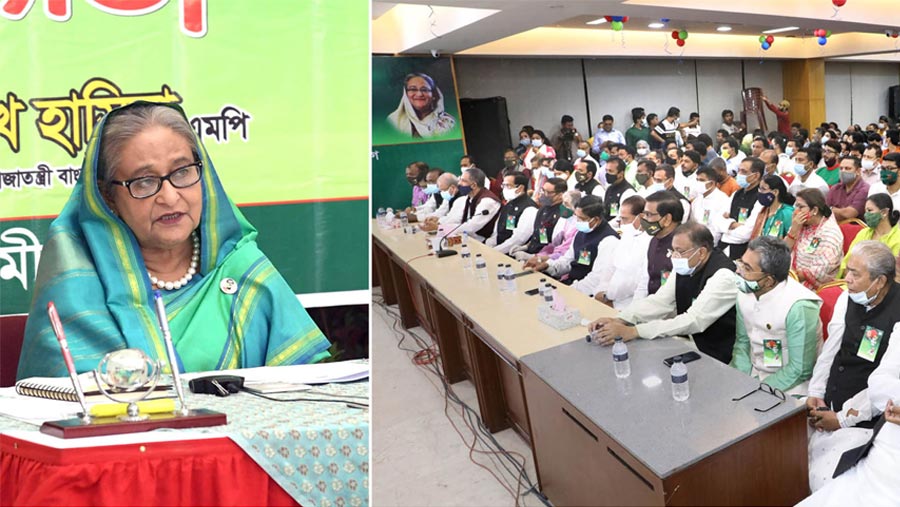 Prime Minister Sheikh Hasina on Sunday (Mar 28) reiterated her call to the countrymen to wear facemasks alongside maintaining the health guidelines and she also asked the authorities concerned to take prompt measures to check fresh surge in the Covid-19 infection.

“I request all not to go outside without wearing masks. Everyone should ensure that they will wear masks and maintain the health guidelines,” she said.

Taking part in a discussion marking the Golden Jubilee of the country’s independence virtually from her official Ganabhaban residence, she said that inoculation against the Covid-19 that her government has initiated would be continued as it is their duty to save lives of the masses alongside ensuring their health protection.

Bangladesh Awami League organised the discussion at its central office at 23 Bangabandhu Avenue in the capital.

Referring to the fresh surge of the coronavirus with different variants, the Prime Minister said, “We have to take prompt measures like the earlier ones to check it.”

She said that they will open educational institutions including schools, colleges and universities after the upcoming Eid-ul-Fitr in view of the sudden surge in the Covid-19 infection.

She added: “It is a matter of regret that we cannot open the educational institutes now as there is a fresh surge in the coronavirus infection. We will open the schools, colleges and universities after Eid.”

Sheikh Hasina, also the Awami League president, asked her party and its associate bodies’ leaders and activists to stand by the people as they did during the outbreak of the Covid-19 pandemic.

In this connection, she said, “We all (Awami League leaders and activists) have to take preparation to work for dispelling the sufferings of the people caused by the fresh surge in Covid-19 infections.”

She asked her party leaders and workers to take measures to ensure that the people follow the directives regarding the health guidelines that her government announced since outbreak of the coronavirus.

The PM also directed her party men to distribute masks among the people and extend all sorts of supports to the distressed people.

At the outset of the discussion, all the Awami League leaders stood in solemn silence for one minute to show respect to the memories of the martyrs of Language Movement, Liberation War and August 15, 1975 carnage and all the democratic and progressive movements.

Mentioning that her government will do whatever necessary to tackle the Covid-19 pandemic, Sheikh Hasina said Awami League too, as a political party, has its own duty to stand by the people in their tough times.

The Awami League which had brought independence under the leadership of Father of the Nation Bangabandhu Sheikh Mujibur Rahman, has a great responsibility to the people, she added.

She stressed the need for maintaining social distancing in arranging any seminar, workshop, training and other programmes, saying that holding those programmes in open places will help check the spread of the Covid-19 infection.

As part of taking prior preparation to face the onslaught of the Covid-19, the PM called upon all to bring each inch of land and water bodies under cultivation so that no food problem surfaces in the country and if necessary Bangladesh can export food grains to other countries.

She added that the development works would be continued despite the pandemic, saying, “We will make sure the continued advancement of the country.”

Stating that a 10-day programme was arranged to celebrate the birth centenary of the Father of the Nation and Golden Jubilee of Bangladesh’s independence, the Prime Minister said they had to limit the presence of the people at the programmes venue due to the coronavirus.

The programmes were held on a limited scale maintaining health guidelines from Mar 17 to 26 at the National Parade Ground, which were made available on virtual platforms, she said, adding that such programmes will also be held till December 16 next marking the Mujib Barsho.

Sheikh Hasina thanked the people of Bangladesh as they voted the Awami League to power and gave it a chance to celebrate the silver jubilee and the golden jubilee of the country’s independence.

The PM greeted heads of the state and the government of five countries – India, Bhutan, Nepal, Sri Lanka and the Maldives – as they physically joined the celebrations.

She said most of the countries across the globe including the USA, the UK, Germany, Italy and Saudi Arabia, sent messages greeting Bangladesh on the occasion of its golden jubilee of independence.

Extending her heartfelt greetings to all, the premier said, “We’re celebrating the golden jubilee of our independence. Sending messages of greeting (from most countries in the world) marking the occasion is very prestigious for Bangladeshi people.”

Sheikh Hasina said that they will hand over the message of greetings and the videos of the 10-day celebration programmes to her party leaders and workers so that those reach out to the grassroots.

The PM reiterated her vow to build a developed and prosperous country free from hunger and poverty as envisioned by the Father of the Nation.