Delhi will always remain beside Dhaka as faithful friend: Modi 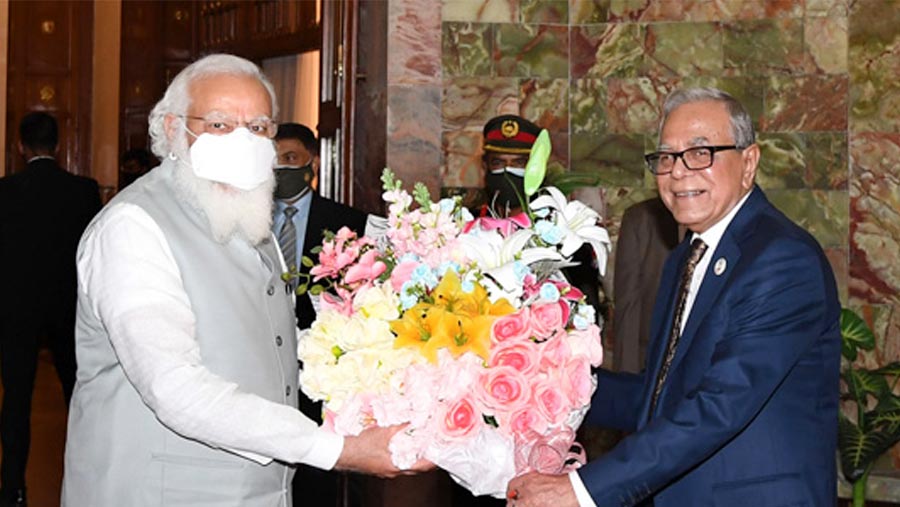 Indian Prime Minister Narendra Modi on Saturday (Mar 27) said India will always stand by the progress and development of Bangladesh as a faithful friend.

The visiting Indian premier told this as he paid a courtesy call on President Md. Abdul Hamid at Bangabhaban in the evening.

Narendra Modi said as a neighboring country, Bangladesh has always been considered a loyal friend of India, and his country would always stay beside Bangladesh, President’s press secretary Md Joynal Abedin told media after the meeting.

Lauding the socio-economic development of Bangladesh under the charismatic leadership of its Prime Minister Sheikh Hasina, Modi said Bangladesh has done a tremendous development in recent time.

Welcoming the visiting Indian premier at Bangabhaban, President Md. Abdul Hamid thanked the Prime Minister of India for attending the birth centenary of Father of the Nation Bangabandhu Sheikh Mujibur Rahman and the Golden Jubilee of Bangladesh’s independence.

The President said his (Modi) visit would be a unique milestone in strengthening the existing diplomatic ties between Bangladesh and India.

During the meeting, the Bangladesh President also expressed sincere thanks to the government of India for conferring the ‘Gandhi Peace Prize 2020′ to Bangabandhu, posthumously in recognition of his outstanding contributions towards social, economic and political transformation through non-violent and other Gandhian methods.

Mentioning Bangladesh and India are very good friends, the President also thanked the Government of India for sending coronavirus (Covid-19) vaccine to Bangladesh as a gift.

The President hoped that the vaccines that would come to Bangladesh from India on a commercial basis would also reach here in time.

Referring to India’s support in 1971, the President thanked the Government and people of India for their support and cooperation in the Great War of Liberation.

The Indian premier also signed a visitors’ book at Bangabhaban, where he spent about 30 minutes from 7.05 p.m.