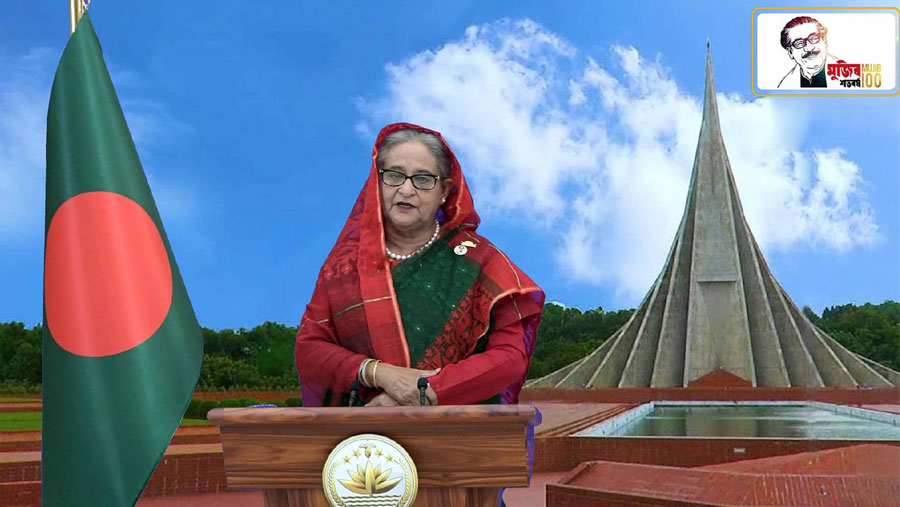 Prime Minister Sheikh Hasina on Thursday (Mar 25) said Bangladesh must take a fresh vow to heighten further its stature as the nation celebrates the golden jubilee of Independence simultaneously with the birth centenary of Father of the Nation Bangabandhu Sheikh Mujibur Rahman.

“The Independence Day this year is not like that of other years,” the premier said in a nationwide address on the eve of the Independence and National Day, paying tributes to 1971 martyrs, Bangabandhu, four national leaders, those who fought for the independence and the August 15 carnage victims.

She added: “We have to take a fresh vow to take the country to a newer height coinciding with the Birth Centenary of Father of the Nation and the Golden Jubilee of our Independence.”

Bangladesh, Sheikh Hasina said, today stood before the world community with its head high, dispelling all negative and discouraging speculations in the past while, even a decade ago, it was portrayed as an example of poverty-stricken underdeveloped countries.

“Today, the development experts treats the same Bangladesh as an ideal model of winning poverty and development,” the premier said.

She said the development indexes suggested Bangladesh’s gradual progress during the past 12 years due to her government’s tireless efforts, which of late was marked by the country’s graduation as a developing nation from a least developed one.

“We exceeded many developed country in numerous areas, as well” she adding that Bangladesh had to made its way towards this graduation till date overcoming conspiracies hatched by anti-independence and anti-liberation elements at home and abroad.

Sheikh Hasina said these elements still remained active requiring everyone to remain vigilant against their activities so none could play ducks and drakes with people’s fate, hinder the country’s democracy and journey towards advancement.

“Let’s build Bangladesh as a developed, prosperous and non-communal country as dreamt by the Father of the Nation (and) being imbued with the spirit of the Liberation War, forgetting all the differences,” she said.

Describing passing 50 years of independence as an important milestone for the nation, Sheikh Hasina, also President of the Awami League, said that the golden jubilee of the independence becomes more colourful as her party, after assuming office, runs the government in accordance of the spirit of the Liberation War.

The PM briefly highlighted the country’s socioeconomic indicators and scenarios with the comparison between present time and fiscal 2005-06.

Referring to the allocation of Tk 373 crore in social safety net in that time, she said the government now raised it to Tk 95,574 crore.

The premier gave all credits of such achievements of the country to commoners saying that farmer-labourer-professionals have made the impossible possible with their labour, talent and innovative power.

“Our government has only created conducive environment giving policy supports,” she said.

Sheikh Hasina went on saying “The people of Bangladesh have proved that they can transform any impossible into possible if they get favourable atmosphere.”

The PM said that her government has been able to fulfill the hopes and aspirations of the freedom fighters as they fought the Liberation War at the directives of Father of the Nation Bangabandhu Sheikh Mujibur Rahman with an expectation to get independence and present a peaceful and happy life.

The English lines of the song could be read as: Let the sky be filled with sounds, mirthful. Who is awake, staring at the East, Yell at them who are still fast asleep -‘Come on, spring out of the bed.’ Look, the night’s gone, dawn smiles With new glare, vigour and bliss, Blossoms, tweets and morning breeze.”

The PM, on the eve of auspicious Independence and National Day, extended her heartiest greetings and congratulations to all Bangladeshis living at home and abroad.

“I’m recalling with gratitude the friendly states, institutions and individuals who had extended their hands of cooperation during our deep crisis period,” she said.

Sheikh Hasina said Bangabandhu Sheikh Mujib had proclaimed independence in the first hour of Mar 26 before being arrested by the Pakistani military.

The premier said he (Bangabandhu) gave directives to the entire nation for resistance war to free the motherland from enemies and his proclamation was broadcast across the country through wireless of the then EPR.

Pakistani juntas took Bangabandhu to the West Pakistan and threw him into prison there, Sheikh Hasina said.

Prior to that, she said, Pakistani rulers unleashed repression-persecution instead of handing over power to Awami League, which secured landslide victory in the 1970 general elections.

The premier said following his directives, the brave Bangalees freed the country from the enemies through the nine-month Liberation War and the final victory was achieved on Dec 16 in 1971.

“The independence of our beloved motherland is the results of the constant political struggles of 24 years. And to this end, the Father of the Nation led the struggles from the forefront from the beginning,” she said.

She added: “As the great man named Bangabandhu Sheikh Mujib was born, today we’re proud citizens of independent and sovereign Bangladesh. As he was born, today we can feel proud with our own country, language-culture.”

Sheikh Hasina continued: “Sheikh Mujib is the architect of a country, nation and state. So, we’re celebrating his birth centenary and golden jubilee of independence simultaneously.”

She extended her heartfelt thanks to the people of Bangladesh as they voted Awami League, which led the Liberation War, to state power during the celebrations of the two important milestones of the national life.

Sheikh Hasina said Bangabandhu had not only dreamt of an independent-sovereign country also of wiping out of the sorrow-distress of the general people of this land who faced suppression-exploitation, repression-persecution, died of starvation-diseases for hundreds of years by ensuring their improved life including providing food, clothing and healthcare.

She went on saying it is unfortunate that the anti-liberation evil forces had assassinated Bangabandhu and most of his family within only three and a half years of independence.

“Through his killing, the development and progress of Bangladesh were stalled as well as the spirit of Liberation War was destroyed,” she added.

The premier noted in the post-1975 period, the undemocratic rulers, who illegally grabbed the power, derailed Bangladesh from its ideology and deceived with the country’s people for long 21 years.

“They deprived the people of their fundamental rights – food, clothing, housing – by plundering their wealth. And introduced Bangladesh before the world as the country of beggars,” she said.