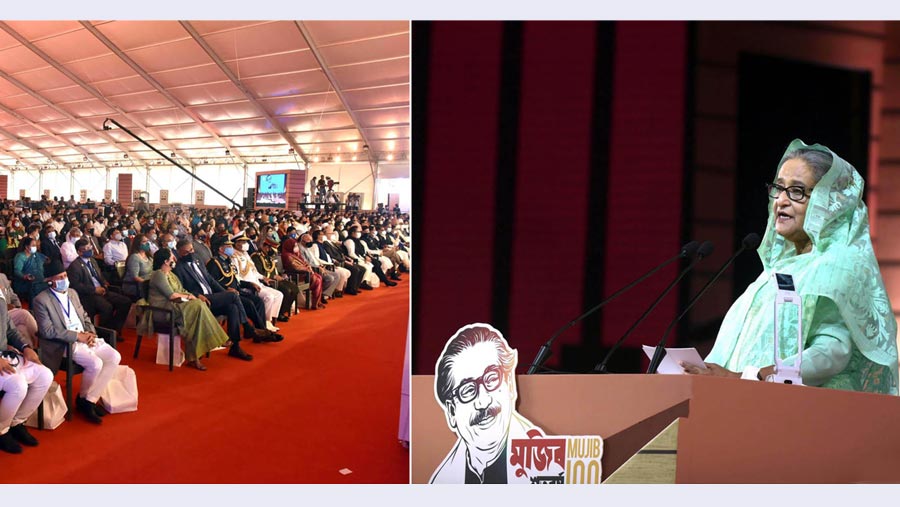 Prime Minister Sheikh Hasina on Monday (Mar 22) made a fervent appeal to the world people to ensure sustainable development for their greater interest.

“I make a fervent call to the people of the entire globe to make sure durable development for their greater interest,” she said.

The premier was speaking at the 6th day programmes of the 10-day grand celebrations of the birth centenary of Father of the Nation Bangabandhu Sheikh Mujibur Rahman and the Golden Jubilee of independence at the National Parade Square in Dhaka in the afternoon.

Sheikh Hasina, who chaired the function, pointed out the global warming, saying the climate change has made the countries of the subcontinent the most vulnerable. “We’re the most sufferers of the consequence of climate change though we’re not contributing to it,” she said.

The premier went on saying: “We can temporarily protect ourselves through adaptation, but the process will fail to provide sustainable protection unless the current trend of climate change is restricted.”

As the current President of the Climate Vulnerable Forum or CVF, Sheikh Hasina said Bangladesh has been urging the world leaders to take immediate steps to combat climate change.

Referring to the launching of the Global Climate Adaptation, Bangladesh office last year, the premier said it has started working on tackling the effects of climate change in South Asia.

Sheikh Hasina said countries on the Himalayan basin are prone to natural disasters such as earthquakes, cloud bursts, avalanches, landslides and flash floods.

In addition, she said, the coastal regions like Bangladesh are to stand against frequent floods, tidal surges, earthquakes, heavy rains, or droughts.

President Hamid’s wife Rashida Khanam and Bhandari’s daughter Usha Kiran were present, among others, at the ceremony.

The Nepalese President became the third among the world leaders to attend the celebrations.

Earlier, Maldivian President Ibrahim Mohamed Solih and his spouse Fazna Ahmed graced the opening ceremony of the celebrations on Mar 17, and Prime Minister of Sri Lanka Mahinda Rajapaksa joined on the third day.

To join the celebrations, Bhutanese Premier Lotay Tshering is scheduled to arrive Dhaka on Tuesday morning, while Indian Prime Minister Narendra Modi will join the ceremony on Mar 26.

The theme of the celebrations is “The Eternal Mujib” but a separate theme for each day has been selected with today’s one being “This Land Is My Land”.

The PM said none will deny that a huge part of the population in South Asia is still living below the poverty line, of which a large number of people are still going to bed every night with half-stomach or no food.

“Even many people are deprived of the minimum necessities of the life,” she noted.

Sheikh Hasina said it is possible to alleviate poverty of the people of South Asia by ensuring optimum utilization of the natural resources that are naturally endowed in this region.

The premier vowed to turn South Asia into a poverty-free developed region through friendly relations and cooperation of all countries.

“We’ll continue our strides to transform South Asia into a poverty-free developed and prosperous region by maintaining friendly ties with each other,” she said.

Paying glowing tributes to Bangabandhu, Sheikh Hasina said he had always fought for the freedom of the people under exploitation and deprivation as well as always vocal for establishing basic human rights and wanted the people of independent Bangladesh to be economically self-reliant.

“He (Bangabandhu) was on a mission to ensure basic rights like food, clothing, shelter, medicine, and education for all. But, it was very unfortunate that the progress of Bangladesh came to a halt after his assassination with most of his family members by the killers on 15th August ,1975,” she said.

Referring to the journey of the last 12 years of the present government, the premier said: “We’ve been tracking through the path guided by the Father of the Nation.”

Sheikh Hasina said Bangladesh has achieved tremendous successes beyond imagination in all socio-economic indicators, and last month, it received a final recommendation to graduate from a least developed country to developing country status.

The PM congratulated the government of Nepal and its people as the country also received a final recommendation to step-up to a developing country status with Bangladesh simultaneously.

“Excellent friendly relations have existed between our two countries since independence... we uphold similar views on various regional and international issues,” she said.

Stating that Nepal is a very close neighbor and friendly country, Sheikh Hasina said during Bangladesh’s great liberation war in 1971, the then government of Nepal and its people extended a helping gesture to the freedom-loving Bengalis in various ways, including providing weapons to the freedom fighters.

The premier said Nepal was among the first-phase countries to recognize independent and sovereign Bangladesh which formally did it in January 1972.

“We gratefully remember the contribution of the people of Nepal. In reciprocity of their contribution to our war of Independence, we honored 11 Nepali citizens with the ‘Friends of Bangladesh’ award in 2012 and 2013 respectively,” she added.

Citing the signing of the BBIN agreement and providing access to Nepal by Bangladesh in using its Syedpur Regional Airport as well as Mongla and Chittagong Seaports, she said mutual cooperation between the countries of the region will be strengthened further.

“On behalf of myself, my younger sister Sheikh Rehana and the people of Bangladesh, I would like to express my sincere gratitude and appreciation to the honourable President of Nepal for attending the occasion,” she said.

“The presence of the Nepalese President has added more beauty and more honour to the event,” she said.

“Our gratitude to all of them,” the PM said, extending her heartfelt thanks to those who sent greetings and video messages on this auspicious occasion.