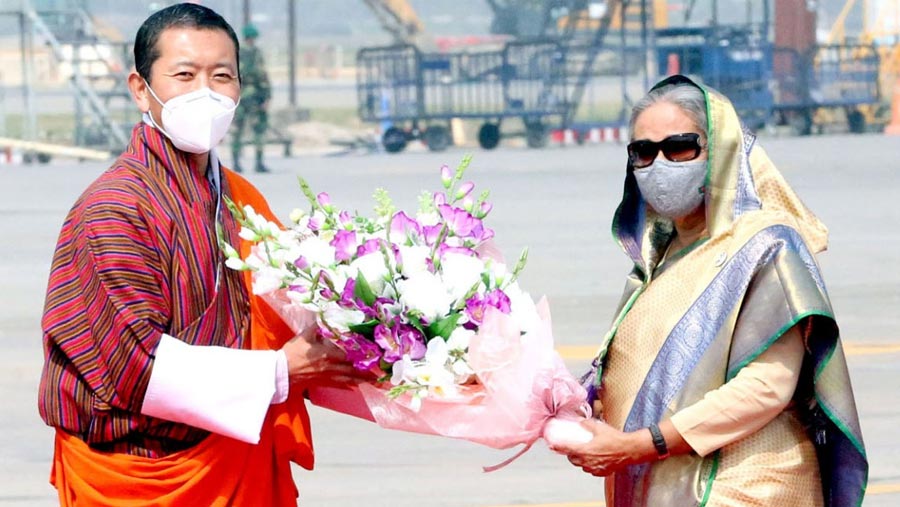 A red carpet was rolled out as Bhutanese Prime Minister Dr Lotay Tshering arrived in Dhaka this morning on a three-day official visit. Tshering is visiting Bangladesh as a special representative of the Bhutanese King to attend the celebration of Birth Centenary of Father of the Nation Bangabandhu Sheikh Mujibur Rahman and Golden Jubilee of country’s Independence, local media reported.

The Bhutanese Premier became the fourth among the world leaders to attend the 10-day celebration. A special flight of Royal Bhutanese Airlines Druk Air, carrying the Bhutanese Prime Minister along with his entourage members, landed at Hazrat Shahjalal International Airport (HSIA) at 09:30 a.m. Prime Minister Sheikh Hasina received her Bhutanese counterpart at the airport by presenting a flower bouquet, while a 21 gun salute heralded the state guest’s arrival.

The Bhutanese PM was given a guard of honor by a smartly turned out contingent drawn from Bangladesh Army, Navy and Air Force at the HSIA. Sheikh Hasina and her Bhutanese counterpart Tshering enjoyed the state honour, staying on the makeshift saluting dais while the national anthems of the respective countries were played.

The state guest also inspected the parade and subsequently both the premiers introduced the delegations of the respective countries to each other. Cabinet Members, Cabinet Secretary, Principal Secretary to the PM and Chiefs of the three services, among others, were present.

From the airport, the Bhutanese Premier will go to the National Memorial in Savar and will pay rich tributes to the martyrs of the Liberation War of Bangladesh by placing a wreath there.

Tshering will sign the visitors’ book and plant a sapling on the memorial premises. He will also visit the Mimusops Elengi Variegata sapling planted by him on Apr 12, 2019. Later, he will go to Bangabandhu Memorial Museum at Dhanmondi no. 32 to pay tributes to the country’s founding father Bangabandhu Sheikh Mujibur Rahman, the greatest Bangalee of all times.

He will visit the museum and sign visitor’s book there. Later, he is scheduled to visit BIMSTEC Secretary General’s residence and have a meeting with the Secretary General and Directors. Foreign Minister Dr. AK Abdul Momen will call on Tshering at the Presidential Suite in the hotel where he will be staying.

In the evening, the Bhutanese Premier will attend the cultural programme and Banquet hosted by PM Sheikh Hasina in honor of him.

On Wednesday, Tshering is scheduled to meet Sheikh Hasina at the Prime Minister’s Office. Followed by bilateral talks, he will sign visitor’s book there.

The Bhutanese PM will pay a courtesy call on Bangladesh President Md. Abdul Hamid at Bangabhaban. He will sign the visitor’s book there. Later in the afternoon, Tshering will join the celebration at National Parade Square as the guest of honor where Prime Minister Sheikh Hasina will receive him.

To join the 10-day celebration from Mar 17-26, 2021 with the theme of “The Eternal Mujib”, Indian Prime Minister Narendra Modi will arrive Dhaka on Mar 26 and depart from Dhaka on Mar 27 as the last world leader.