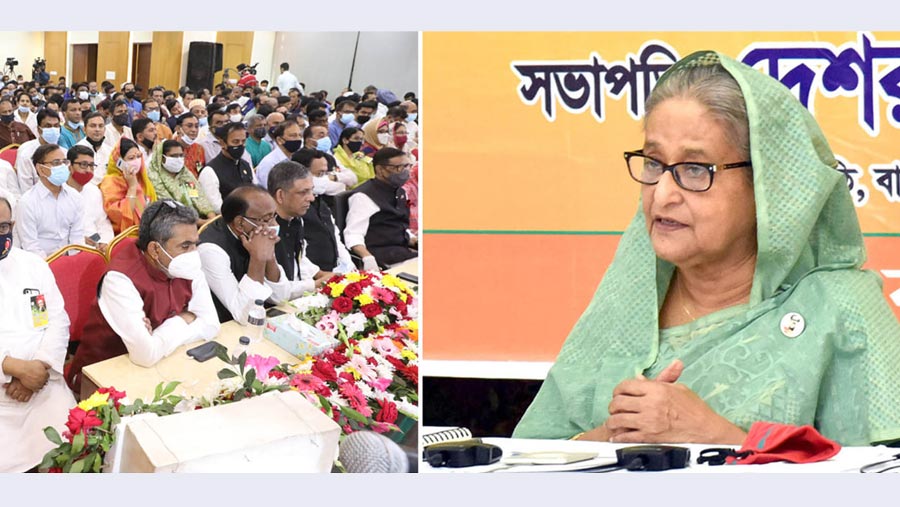 Prime Minister Sheikh Hasina on Sunday (Mar 21) said it is now proven that the country is moving ahead following the development paths of Father of the Nation Bangabandhu Sheikh Mujibur Rahman.

“We are doing what Father of the Nation had shown us during his tenure of three and a half years. We are moving ahead following his paths as we are trying to implement successfully the tasks he wanted to accomplish and now the people of the country are reaping the results of that,” she said.

Sheikh Hasina said Bangabandhu had dreamt of building Bangladesh as a hunger-poverty-free country where people would have an improved life and that is why he had taken those development agendas.

The premier was addressing as the chair a discussion meeting organized by Bangladesh Awami League to mark 101st birth anniversary of Father of the Nation Bangabandhu Sheikh Mujibur Rahman and National Children’s Day at the party’s central office in city’s 23 Bangabandhu Avenue, joining virtually from her official residence Ganabhaban, local media reported.

Sheikh Hasina, also the president of ruling Awami League, said Bangladesh has now achieved the status of developing nation under this government from the list of least developed countries (LDCs) going through Bangabanhdu-directed pathways overcoming all the black chapters from 1975 to 1996 and 2001 to 2008, and the country will continue its progress.

“Bangladesh will move ahead as a developing nation and will be a developed nation by 2041,” she said.

The Prime Minister said the Bangali people would not have emerged as an independent nation without the birth of Bangabandhu Sheikh Mujibur Rahman.

“We would not get respect in the world, would not get a state and a flag if Bangabandhu was not born here in the country,” she noted.

Referring to the celebration of the birth centenary of Father of the Nation, Sheikh Hasina extended her gratitude to the country’s people and said it has been possible as they (people) voted Awami League to power.

“There were attempts to wipe out the name of Bangabandhu, but none could erase this name. There were also attempts to make a false announcer (of independence), but no sign of this announcer will be there because today the world leaders are making publicity and somewhere resolution is also being adopted that Father of the Nation Bangabandhu Sheikh Mujib proclaimed the country’s independence on Mar 26, 1971,” she said.

Mentioning that Bangabandhu had adopted each strategy of struggle carefully, the Prime Minister said he moved forward step by step and inspired the people with the spirit of independence.

“He (Bangabandhu) had risked his life and tolerated limitless torture, repression and imprisonment but never bowed down rather moved ahead with a specific ideology. We are an independent nation today due to the bold leadership of Father of the Nation,” she pointed out.

She said Father of the Nation had made the country independent and tried to change the fate of poverty-ridden people.

Referring to the tree plantation campaign on the occasion of Bangabandhu’s birth centenary, Sheikh Hasina urged her party leaders and activists to continue it as the celebration will continue still Dec 16 alongside the Golden Jubilee of the country’s independence.

She also asked Awami League and its associate bodies to observe the celebration by designing separate programmes, including pro-people ones, so the common people can be benefited from it.

“We’ll have to celebrate in a way that the country’s common people get its benefit and simultaneously we’ll have to carry on our festivity as well,” she said, adding, “So, we’ll arrange these programmes till Dec 16 next on the occasion of the Mujib Year and the golden jubilee of the independence.”

The PM also directed the Awami League and its associate bodies to take programmes like cultural events, discussion, essay writing and other competitions, Doa Mehfil, tree plantation and particularly assistance programmes for the poor up to the grassroots level.

“Take different programmes not only in Dhaka city, but also at the grassroots levels – union, upazila and district levels,” she added.

About the assistance programmes for the poor, she said the most important thing is to help the poor.

“We’ll have to alleviate, as much as possible, the sufferings the poor are facing due to coronavirus. You (Awami League leaders and activists) did it as well. The assistance work was done in our country. But we’ll have to continue it,” she said.

The government has extended the “Mujib Barsho” as Covid-19 pandemic forced to postpone many events or switch to virtual platforms to arrange it. On the other hand, the head of government reiterated her call to the country’s people to follow the health safety protocols strictly as a fresh surge of Covid-19 pandemic has started in many places.

Repeating her government’s determination to provide a house to each homeless person in Mujib Barsho, she said work is going on to provide houses to the homeless and landless people.

Besides, the government has provided electricity where the national grid is available while solar power in the off-grid areas alongside the continuous infrastructural development, she added.

The PM extended her thanks to the Agriculture Institutes and others related for making Guinness World Records through composing crop field mosaic of Bangabandhu. She especially extended her heartfelt gratitude to the farmer who created it first.

Sheikh Hasina said he (farmer) has shown the way to others and this is the Bangladesh for which Bangabandhu had worked and sacrificed his life. “We have to repay our debt to Bangabandhu bringing smiles on the faces of the farmers and hard working people,” she added.