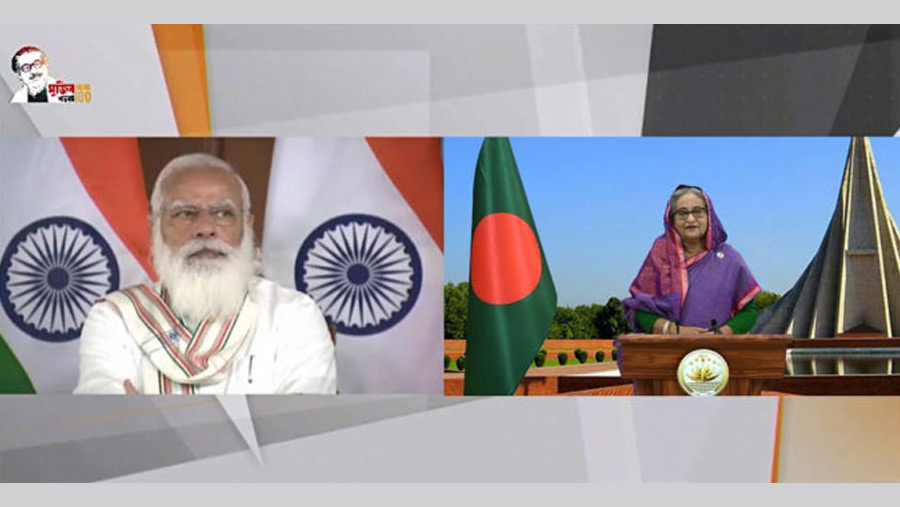 “We expect that the framework we are inaugurating today will also help Bangladesh trade more easily not only with India, but with Nepal and Bhutan as well,” she said.

The PM made the remarks in a video message to inaugurate virtually the Maitree Shetu over the Feni river jointly with her Indian counterpart Narendra Modi.

Describing the moment as a historic one, Sheikh Hasina said she thinks the Maitree Shetu will not only create connectivity between two countries, but also play a significant role in business-trade and economic development.

In this connection, she said, “We are creating a new era in South Asia through providing connectivity to India. We are in a region which has remained conservative in opening up and where inter-regional trade is far below its potential”.

She added that she believes political boundaries should not become physical barriers to trade.

The premier simultaneously said that Bangladesh is attaching priority to maximise the use of its geographical location to make it a connectivity hub between South and South East Asia.

Sheikh Hasina said, “Bangladesh’s growth trajectory, along with its geographic location, makes it an extremely attractive neighbor in South Asia.”

The PM said that as one of the leaders in the global textile industry, they have carved a distinct path for themselves and the country has become a favoured destination for foreign investment.

She added that Bangladesh is ready to maximize its locational advantage as a connectivity hub between South and South East Asia.

“We believe the cross-border transport systems that Bangladesh is developing with India is an important step in this regard and will enable us to play an important role in regional trade and commerce,” she continued.

The premier opined that the Feni Moitree Shetu is expected to significantly improve the socio-economic condition of the people of Tripura and surrounding North Eastern states of India.

“We hope it will also contribute to improving the livelihoods of those residing on the Bangladesh side of the bridge,” she said.

She went on saying, “fifty years ago in 1971, India opened up its border for Bangladesh’s people to support their freedom struggle; today, we are building a prosperous region together. I wish successful operation and utilization of the Moitree Shetu.”

The event is taking place at a time when we are celebrating the birth centenary of Father of the Nation Bangabandhu Sheikh Mujibur Rahman, the Golden Jubilee of Bangladesh’s Independence and the 50th year of Bangladesh-India diplomatic relations, she said.

She continued that the opening of the Feni bridge is a testimony to the Bangladesh Government’s continued commitment to support our neighbor India, in strengthening connectivity in the region, particularly for the North-East of India.

The PM said that “in 2010, the then Chief Minister of Tripura placed a proposal before me to build a bridge over the river Feni.”

“We considered the request positively. Since then, the Government of Bangladesh has extended all necessary support to the Indian side for construction of the bridge,” she said.

Mentioning that ten years later, today, the bridge is a reality, she said this bridge will be a trading lifeline for the North East of India.

She also said, “As you all know, Bangladesh has already allowed the use of Chattogram and Mongla ports for the movement of goods to and from India.”

Now, with the opening of Feni bridge, movement of goods between West Bengal and the landlocked Indian states in North East can take place through Bangladesh, she opined.

Earlier, the nearest seaport for Agartala was Kolkata which is over 1600 kilometres away, whereas today, Agartala’s nearest seaport is Chattogram and the distance through Bangladesh is less than 100 kilometres, the premier said. Narendra Modi also laid foundation stones of multiple infrastructure projects virtually at Sabroom in Tripura.

“The connectivity through the bridge is not only strengthening the friendship between India and Bangladesh but also proving to be a strong link of business too,” the Indian Prime Minister said and thanked Bangladesh government for the cooperation in implementing the project.

He said the entire region is being developed as a trade corridor between Northeast India and Bangladesh and emphasized that the rail and water connectivity projects that have been realized in the recent years have been strengthened by this bridge.

“This will improve connectivity of south Assam, Mizoram and Manipur along with Tripura with Bangladesh and Southeast Asia... the bridge will give an impetus to the economic opportunity in Bangladesh also,” he added.

He said now people will not have to depend only on the road for any kind of supply to the North-East as efforts are underway to connect Chittagong port of Bangladesh with North-East through an alternative route via the river.

In this connection, Narendra Modi said the ICP in Sabroom (India) will work like a full-fledged logistic hub with warehouses and container trans-shipment facilities.

“Due to this bridge over Feni River Agartala will become the nearest city to an international sea port in India. Projects related to broadening of NH-08 and NH-208 which were dedicated and for which foundation stone was laid will strengthen the connectivity of the Northeast with the port, he said.