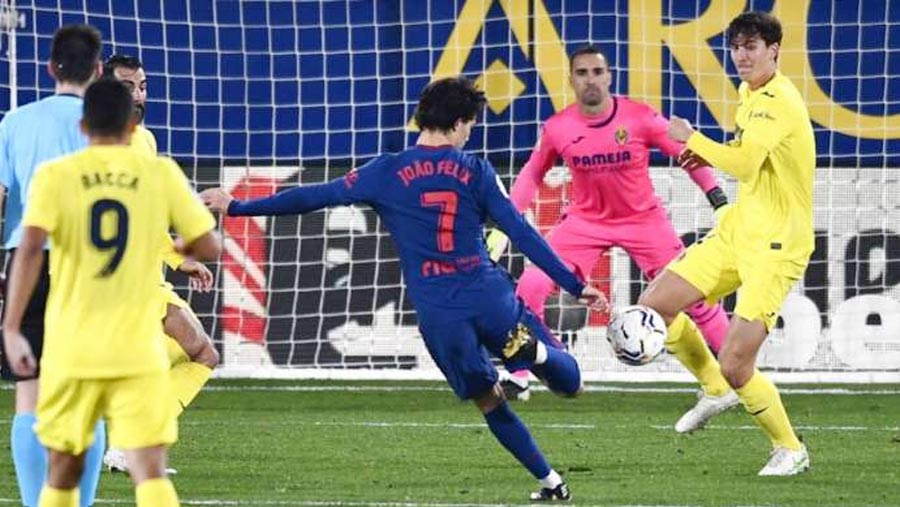 Atletico Madrid got back to winning on Sunday (Feb 28), beating Villarreal 2-0 to halt its slump and restore a five-point lead at the top of the Spanish league. An own-goal by Alfonso Pedraza in the first half and a goal by forward Joao Felix in the second helped Atletico end a three-game winless streak and rebuild its lead over second-place F.C. Barcelona, which won 2-0 at fourth-place Sevilla on Saturday. Atletico has a game in hand compared to the Catalan club.

Leaders Atletico Madrid moved five points clear at the top of La Liga by winning away at Villarreal.

Atletico, aiming to win the Spanish title for the first time since 2013-14, went ahead thanks to an own goal from Villarreal's Alfonso Pedraza.

Joao Felix doubled their lead with a low strike in the second half.

The result leaves them five points ahead of second-placed Barcelona and six ahead of Real Madrid, who Atletico host in a derby game on Mar 7.

For Atletico, this was a return to form after they had gone three games without a win and were beaten 1-0 by Chelsea in the first leg of their Champions League last-16 tie on Tuesday.

They have the best defensive record in La Liga with only 16 goals conceded in 24 matches, although this was their first clean sheet in 10 matches in all competitions.

Real will move above Barca and into second if they win at home against Real Sociedad on Monday (20:00 GMT).