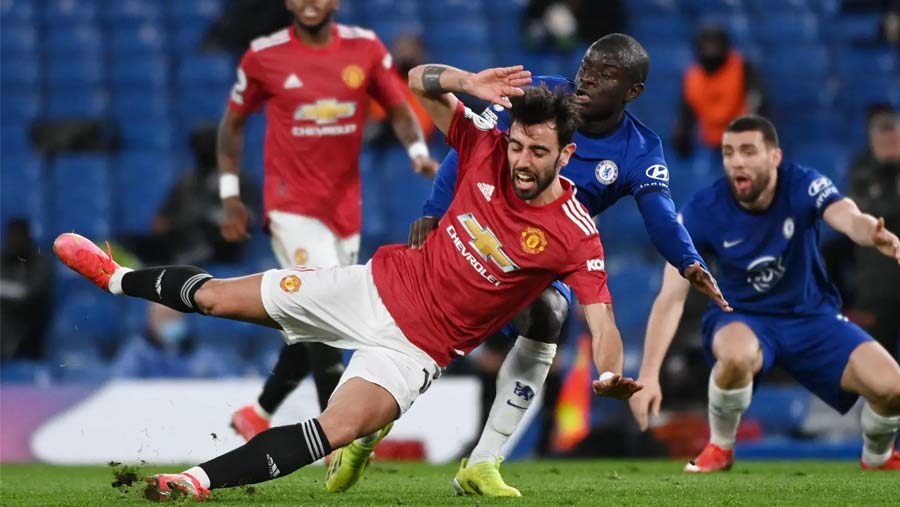 Chelsea F.C. missed a chance to regain their place in the Premier League's top four as they largely dominated second-placed Manchester United but had to be content with a drab 0-0 draw at Stamford Bridge on Sunday (Feb 28).

The home side carved out the best chances but Man United, who had a decent first-half penalty appeal turned down, defended solidly throughout to earn a point.

The main talking point revolved around a first-half VAR decision in which Chelsea's Callum Hudson-Odoi was adjudged not to have handled the ball in his own penalty area.

After a shot was saved by Edouard Mendy the ball bounced out and Hudson-Odoi and Mason Greenwood both challenged for it with the ball taking the slightest touches off both their arms.

Referee Stuart Attwell, who did not give a penalty initially, was instructed to consult a pitchside monitor by the VAR official, but having watched it, surrounded by rival players, he upheld his decision.

Not surprisingly the rival managers had contrasting views on the decision.

Chelsea began the much sharper side and Olivier Giroud was inches away from connecting with a diving header.

But clear chances were few and far between with United's chief creator Bruno Fernandes unable to affect the action.

Hakim Ziyech forced a superb save from United keeper David De Gea while Mason Mount also threatened for the hosts while Timo Werner looked favourite to convert a Reece James ball across the area but United defender Victor Lindelof produced a last-ditch interception to deny the German.

Mendy made a meal of a few saves at the other end while Fred was closest to scoring for the visitors when he curled just wide with around 20 minutes remaining.

It was hard to make a case for either side deserving the three points, however, in a game that never came to the boil.