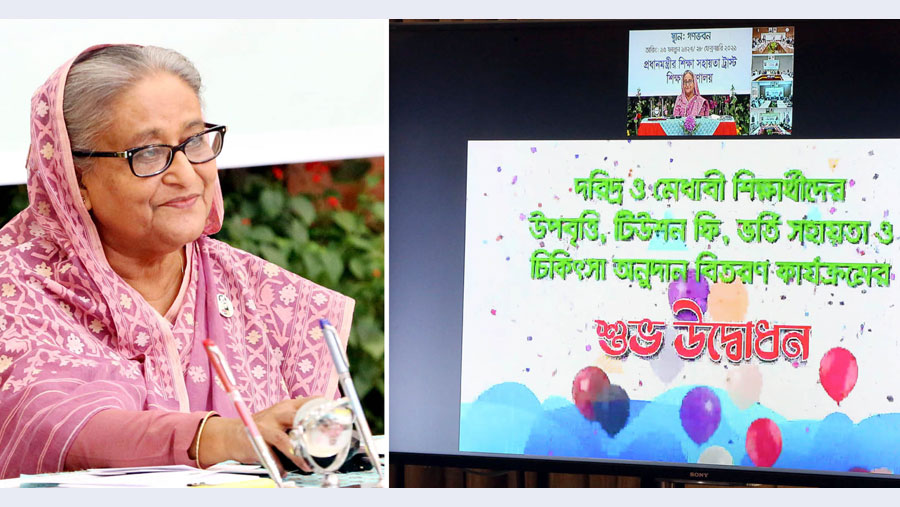 “We are making education multi-lateral with setting up universities considering the demand of the modern era as the students can keep pace with the world,” she said.

The PM said they are establishing universities on science and technology, agriculture, textile, fashion design, marine, civil aviation and aerospace and medical as part of the government move to make education multifaceted.

She was inaugurating a programme to distribute stipend, and amount of tuition fee, admission fee and treatment aid to the poor and meritorious students under the PM’s Education Assistance Trust, joining virtually from her official Ganabhaban residence in Dhaka, local media reported.

Bangladesh has now become a developing nation, she said, adding that to sustain the status, it needs to expand the education to generate skilled manpowers and worthy citizens.

The PM said her government has also been establishing universities considering the demand of the particular localities.

To pursue the multi-dimensional education, she said that her government has been attaching topmost priority to science and technology to create skilled manpower.

She added: “I believe science and technology education is the most essential one as it creates employments at home and abroad.”

The premier said she has been taking various pragmatic measures mainly to create apt manpower as they can make great contribution to economic development.

She went on saying that the local demand for skilled and technologically-abled manpower is on the rise as the government has been setting up 100 economic zones across the country which attracts local and foreign investments.

Sheikh Hasina hoped that all the educational institutions will reopen on Mar 30 after a long shutdown due to the Covid-19 pandemic.

Before reopening the school, colleges and universities, she said that all of those teachers and employees will surely be brought under vaccination.

The students of colleges and universities will be vaccinated following the protocol of the WHO (World Health Organisation), she added.

The PM said that her government has been pursuing “My education at my home” programme through the Sangsad Television to continue the education of the students.

Alongside the TV, classes are being held online taking the advantage of the Digital Bangladesh, she said.

After assuming office, Sheikh Hasina said that her government has taken measures to spread education massively as they consider the expenditure for education as investment.

Mentioning that Bangladesh has graduated to a developing country from the least developed one, the PM said it is necessary to keep it up till becoming a developed one and education is a must to comply with it.

Referring to a speech of Father of the Nation Bangabandhu Sheikh Mujibur Rahman, she said that no nation can develop without education.

The PM said her government has been working to turn the country into a Shonar Bangladesh free from hunger and poverty as envisioned by the Father of the Nation while education is a prerequisite to pursue it.

She however asked all concerned including guardians and teachers to make sure gender equality in education as in many cases it is seen that the ratio of female students are on rise.

Referring to the matter of decreasing male students in comparison to female ones in classes, she said, “Please pay attention to address the issue.”

The PM has also announced to distribute Tk 87,52,55,400 as stipend, tuition fee, medical aid for the poor and meritorious students under the PM’s Education Assistance Trust for the FY 2020-21.

Sheikh Hasina said that her government had attached topmost priority to education after assuming office in 1996 after long 21 years.

Then, she said, they took a programme to eradicate illiteracy from the country that resulted in the rise of literacy rate to 65 percent from 45 percent during the BNP regime.

The literacy rate again decreased to 44 percent from 65 percent as the Awami League did not come to power in 2001 and then BNP government had stopped many measures taken by her government to expand education, the PM said.

She said that her government has established many higher educational institutions in the country to make education multifaceted following the footsteps of the Father of the Nation.

She said that they have taken measures to establish 12 science and technology universities and medical universities in every division.

Apart from these, Sheikh Hasina said, they have taken measures to establish technical institutes in every Upazila and at least one university in every district under private or public initiative.

Briefly describing measures for the development of education, Sheikh Hasina said, her government has been implementing the Education Policy-2010.

The government has been providing the students with books free of costs, stipends and scholarships to the poor and meritorious students for higher education mainly to ensure access of all to education, she added.

The PM said that they have established Bangabandhu Sheikh Mujibur Rahman Memorial Trust to help the poor and meritorious students to get higher education.

Around 1,500 poor students are getting financial assistance for their education every year, she informed.