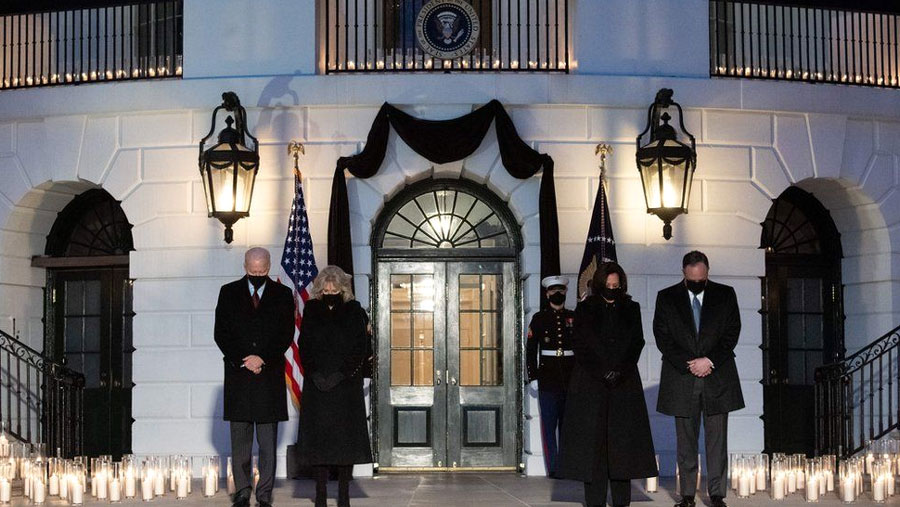 President Biden, Vice-President Harris, the First Lady and the Second Gentleman during a moment of silence

President Joe Biden has addressed the nation as the United States marks 500,000 deaths from Covid-19, the highest toll of any country in the world.

President Joe Biden ordered flags lowered to half mast Monday (Feb 22) after the United States crossed the heartbreaking milestone of 500,000 Covid-19 deaths, while Britain eyed lifting lockdowns in the latest sign of global gains against the pandemic.

“I know what it’s like,” an emotional Biden said in a national television address, referring to his own long history of family tragedies.

“I ask all Americans to remember, remember those we lost and those they left behind,” Biden said. “I also ask us to act, to remain vigilant, to say socially distant, to mask up, to get vaccinated.”

Biden, accompanied by his wife Jill and Vice President Kamala Harris and her husband Doug Emhoff, then stood outside the White House to mark a moment’s silence in front of 500 candles representing the toll – the highest reported of any country.

Earlier, flags were lowered over the White House and at federal buildings nationwide as well as at embassies around the world.

“As a nation we cannot and must not let this go on,” Biden said, urging unity. “We have to fight this together as one people, as the United States of America.

Unlike his predecessor Donald Trump, who often sought to minimize the disease, Biden has made the pandemic his top priority, simultaneously pushing an aggressive vaccine rollout and making frequent, public shows of empathy.

It is a strategy that could make or break the Biden presidency, already juggling high-stakes economic challenges and the tense political aftermath of the Trump era.

But signs are also emerging that progress is being made both in the United States and around the world, with infections dropping sharply and vaccine deliveries rising steadily.

In Britain, Prime Minister Boris Johnson outlined a “gradual and cautious” approach to lifting curbs in England that could see life there return almost to normal by the end of June. The first step will be the return of children to schools from Mar 8.

There was also good news from a University of Edinburgh study finding that Pfizer and Oxford-AstraZeneca vaccinations have led to a “substantial reduction” in Covid-19 admissions to hospitals in Scotland.

Despite the dramatic losses in the United States, the trend there is also sharply downward.

Rochelle Walensky, director of the Centers for Disease Control, said US deaths are at their lowest since December, with a 39 percent drop in the latest seven-day average of new daily cases.

Globally, the toll is nearing 2.5 million.

Meanwhile India, the world’s second worst-hit nation in terms of infections, passed a bleak threshold on Monday by registering its 11 millionth case following a renewed rise in transmission.

Fresh restrictions on gatherings came into force in the western state of Maharashtra, home to financial capital Mumbai, which has logged almost 52,000 deaths since the start of the pandemic.

The vast nation’s inoculation drive is creeping slowly, and India’s Serum Institute – the world’s biggest vaccine maker – has urged other countries to be “patient,” saying it has been told to prioritize the home market.

According to the Centers for Disease Control, more than 61 million people have received at least one shot of vaccine in the United States, with some 18 million getting the full two doses.

In Australia, top officials Sunday were among a small group receiving the first doses, a day before the program starts in earnest.

Prime Minister Scott Morrison got the Pfizer/BioNTech vaccine at a medical center in Sydney, in what the government said was a bid to boost public confidence after some anti-vaccine protests.

And in Gaza on Sunday, some 20,000 Russian-made Sputnik V vaccine doses arrived from the United Arab Emirates.

The shots came via the Rafah crossing with Egypt, meaning they did not pass through Israel, which has maintained a tight blockade on Gaza since 2007.

Britain’s government has vowed to offer a first dose to every adult by the end of July. More than 17 million people have now received at least a first vaccine dose – one third of the adult UK population.

Meanwhile, hundreds of thousands of German pupils returned to schools and kindergartens for the first time in two months on Monday.

In Hong Kong, leader Carrie Lam received a shot of the Chinese Sinovac drug after the financial hub last week fast-tracked its approval.

And Air New Zealand said it will trial a digital travel pass to give airlines and border authorities access to passenger health information, including their Covid-19 vaccination status.

Countries like the US have contributed money for procurement to supply poor countries, but the WHO said funds are useless if no vaccines are available.

“Even if you have the money, if you cannot use the money to buy vaccines, having the money doesn’t mean anything,” WHO director-general Tedros Adhanom Ghebreyesus said.