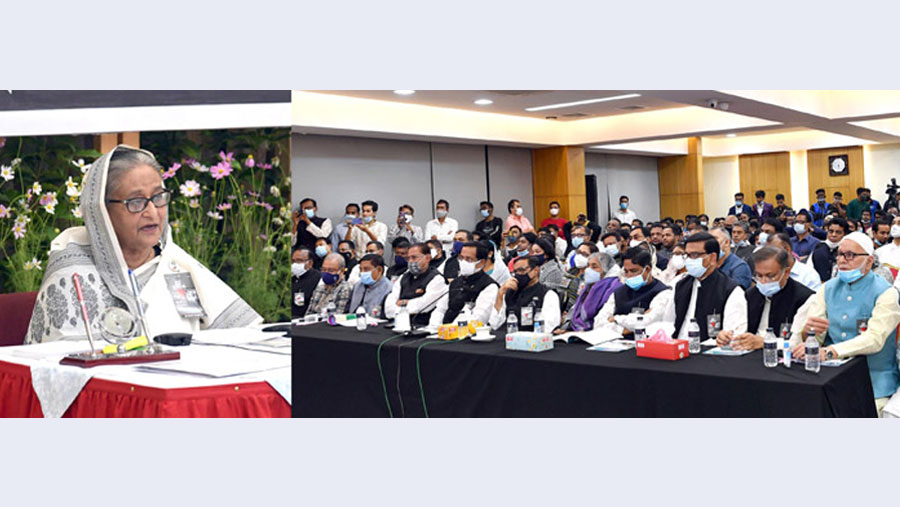 Prime Minister and Bangladesh Awami League President Sheikh Hasina on Monday (Feb 22) said the Bangalee nation had achieved everything including social, financial, cultural and political rights through the Language Movement.

“Language Movement was not only the movement to establish the rights of language, rather it was a movement to achieve everything as the Bangalee nation,” she said.

She said this while presiding over a discussion marking the Shaheed Dibash and International Mother Language Day organized by the Awami League at its central office at Bangabandhu Avenue. The PM joined the discussion virtually from her official Ganabhaban residence in the capital, local media reported.

The PM mentioned that Father of the Nation Bangabandhu Sheikh Mujibur Rahman delivered a speech on Feb 20 midnight in 1971 after placing wreaths at the Central Shaheed Minar.

She quoted Bangabandhu as saying, “The 1952 movement was not only limited to the Language Movement. This movement was for establishing the social, economical, cultural and political rights.”

The premier added that Bangabandhu had established a province as a complete state and gave Bangladesh a status of developed country only in three and a half years but he along with most of his family members were assassinated on Aug 15, 1975.

She continued: “We want to advance Bangladesh towards the development following the path of the Father of the Nation. We have already reached the stage to get the recognition as a developed country.”

The PM said that they have been working to make every life beautiful as well as meaningful with building a “Shonar Bangla” free from hunger and poverty.

She went on saying, “We have been working keeping in mind that the people of Bangladesh can be more rich in terms of education and culture.”

The PM said that her government has been working to provide houses to every homeless and landless people alongside giving power connection to every home by December 16 this year marking celebration of the Mujib Borsho and the Golden Jubilee of the country’s independence.

Sheikh Hasina called upon all to take the Covid-19 vaccine and maintain health safety guidelines, wearing facemasks and washing hands, to remain protected from the virus as the effectiveness of the vaccine is still under research.

“We are vaccinating the people. But everyone has to follow the health guidelines properly to remain protected as how much the Covid-19 vaccine is effective is at the stage of research,” she said.

The PM said that her government has been able to collect the Covid-19 vaccine due to effective measures taken in advance, adding that many countries are yet to collect the vaccine.

Sheikh Hasina, also President of the Awami League urged its party leaders and activists to read the already published seven volumes of the Pakistani intelligence branch reports against the Father of the Nation to know the real facts about the Language Movement.

The PM said that Bangla was established as the state language in the constitution formulated by the Awami League government in 1956.

“The Awami League did everything relating to establishing the Central Shaheed Minar and announcing Feb 21 as the Shaheed Dibas in 1956,” she continued.

As Banglaee is the only nation which shed bloods for establishing the rights of their mother tongue, the Prime Minister said Bangladesh has a responsibility to preserve all mother tongues across the globe.

In this connection, she said that her government has established the International Mother Language Institute and a Language Museum in the institute to pursue the responsibility.