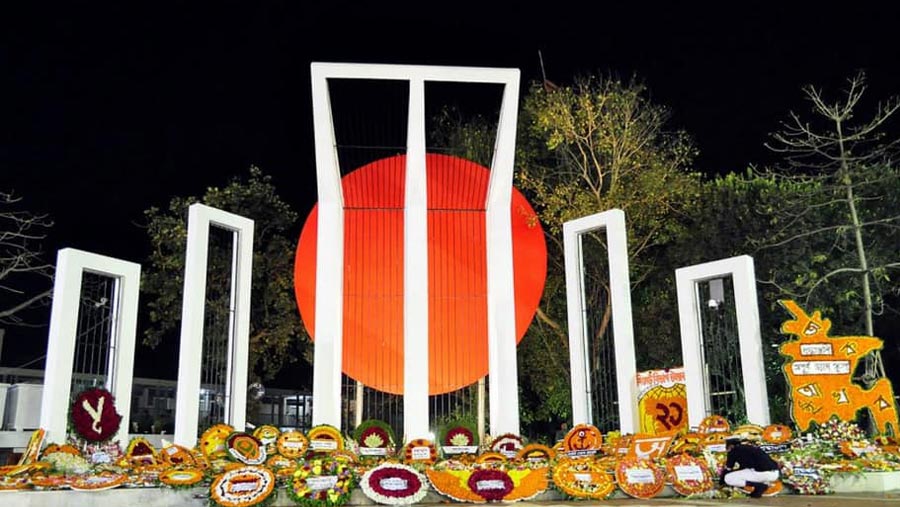 The nation on Sunday (Feb 21) recalled the supreme sacrifice of the language heroes on this day 69 years back on the occasion of Shaheed Dibosh and International Mother Language Day.

Clad in black and white dresses especially traditional sharees and panjabees people in thousands thronged the Central Shaheed Minar in Dhaka since midnight to pay their glowing tributes to the 1952 language martyrs by placing wreaths and flowers at the altar of the monument.

Considering the prevailing Covid-19 situation and following the proper hygiene rules, a maximum of five-member delegate from each organization and a maximum of two persons at the individual level were allowed to lay wreaths at the Shaheed Minar.

President Md. Abdul Hamid and Prime Minister Sheikh Hasina paid their glowing tributes to the martyrs of the historic Language Movement on the occasion of Amar Ekushey and the International Mother Language Day.

On behalf of the President and the Prime Minister, their military secretaries paid the homage by placing wreaths at the Central Shaheed Minar at one minute past zero hours while the immortal song on Amar Ekushey – “Amar Bhaiyer Rakte Rangano Ekushey February” – was being played on the loudspeaker.

They military secretaries stood in solemn silence for some time as a mark of profound respect to the memories of the language heroes.

Later, the Central Shaheed Minar was opened for the masses when thousands of people from all walks of life walked barefoot to it with flowers in hands and humming “Amar Bhaiyer Rokte Rangano Ekushey February” to recall the supreme sacrifice of the language heroes on this day in 1952.

In the morning, ruling Awami League brought out a Provat Feri (morning procession) in the city. At first, the procession joined by Awami League Joint Secretary and Information Minister Dr Hasan Mahmud went to Azimpur Graveyard and paid glowing tributes to the language heroes, including Abul Barkat, Abdul Jabber and Shafiur, by placing wreath.

Later, the procession ended at the Central Shaheed Minar following placing another wreath at the altar of the Shaheed Minar.

Stringent security measures were enforced in and around the Central Shaheed Minar and Dhaka University campus to avoid any unwanted situation. Key city points and crossings and intersections were decorated with festoons with inscription of Bangla letters.

The day is also being observed around the world as the UNESCO recognised the Feb 21 as the International Mother Language Day on Nov 17, 1999. Bangladeshi missions abroad are also observing the day in a befitting manner.

On Feb 21 in 1952, students and people from all walks of life under the All-Party Students Action Committee took to the streets in Dhaka to protest the then Pakistan government’s refusal to recognise Bangla as one of the state languages and imposition of Urdu as the only official language of Pakistan.

Salam, Barkat, Rafique, Shafique, Jabbar and some others embraced martyrdom when police opened fire on the procession in front of the Dhaka Medical College and Hospital.

The movement for Bangla, however, did not stop and Pakistan government on Feb 29, 1956 was compelled to recognise Bangla as one of the state languages of Pakistan besides Urdu.

The decision, however, could not stop the movement against repression and misrule of the then Pakistani government and subsequently led to the War of Intendance and ultimately the emergence of independent Bangladesh.

On the day, the national flag kept at half-mast in all educational institutions, government, semi-government and autonomous offices and private buildings across the country.

Marking the day, ruling Awami League took elaborate programmes, including hoisting national and party flags at half-mast and hoisting black flags atop at the party’s Bangabandhu Avenue central office and Bangabandhu Bhaban and other offices of the Awami League across the country.

Other programmes include wearing of black badges in the morning and later bringing out Provat Feri from south gate of New Market as a mark of respect to the Language Movement martyrs.

To mark the day, a discussion will be held at the Awami League’s central office at 4 p.m. Monday (Feb 22). Awami League President and Prime Minister Sheikh Hasina will chair the discussion through a videoconferencing from her official Ganabhaban residence.

Besides, Qurankhwani, Milad Mahfil and special munajat were arranged at Azimpur graveyard in the capital for the martyrs of the Language Movement.

Offering Fateha and Qurankhwani was held at Azimpur graveyard and special prayers were arranged at all places of worships across the country seeking eternal peace of language martyrs.

Islamic Foundation organized Qurankhwani and special prayers at Baitul Mukarram National Mosque seeking eternal peace of the martyrs, who sacrificed their lives in 1952 for mother tongue.

Shishu Academy organized a discussion at its auditorium in the city marking Shaheed Dibos and International Mother Language Day.

In line with the national programmes, the day was also observed at all educational institutions, city corporations, pourasabhas, the district and upazila administrations and Bangladesh missions abroad.

To mark the day, the Central Shaheed Minar and its adjacent areas on the Dhaka University campus were decorated with street paintings and graffiti with Bangla alphabets and selected verses of eminent poets about the mother languages on the walls.