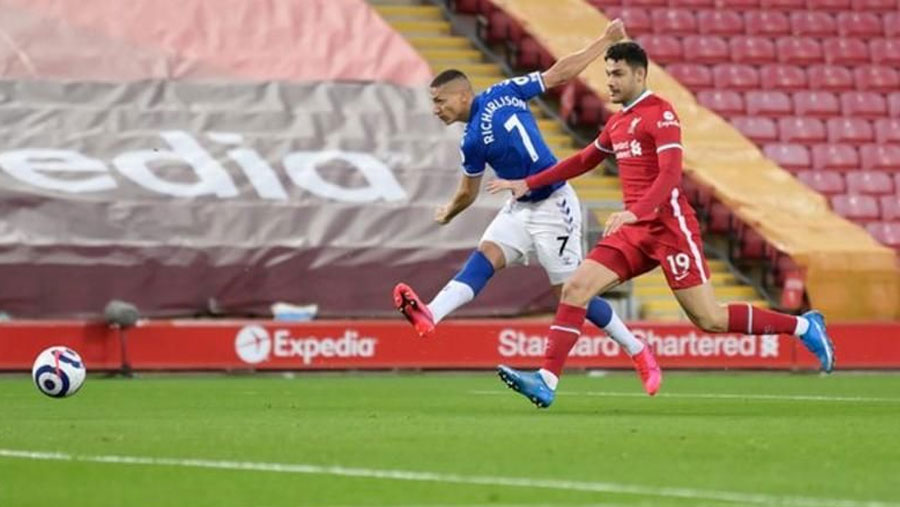 Everton earned their first win at Liverpool since 1999 as the troubled Premier League champions crashed to a 2-0 defeat in the Merseyside derby, while Chelsea’s revival under Thomas Tuchel stalled in a 1-1 draw against Southampton on Saturday (Feb 20).

Everton produced an outstanding Merseyside derby performance to beat Liverpool at Anfield for the first time since 1999.

In a landmark result for both sides, Everton earned their first derby win anywhere since 2010, while Liverpool have now lost four successive home matches for the first time since 1923.

Everton finally rid themselves of their Anfield bogey with a brilliantly drilled performance in which goalkeeper Jordan Pickford and Michael Keane were excellent, while Richarlison led the line tirelessly.

Richarlison put Everton in front after three minutes when he latched on to a superb pass from James Rodriguez to beat Allison.

Liverpool responded and Pickford saved well from Jordan Henderson, who went off injured in the first half, while Everton captain Seamus Coleman should have added to Richarlison's strike only to head straight at Alisson from six yards.

Sadio Mane wasted two headed chances for Liverpool in the second half while Pickford saved superbly from Salah, leaving Everton to wrap up their first derby win in 24 attempts when substitute Gylfi Sigurdsson scored from the spot with seven minutes left after Dominic Calvert-Lewin tangled with Trent Alexander-Arnold.

Everton manager Carlo Ancelotti was all smiles at the final whistle but this was more abject Anfield misery for his Liverpool counterpart Jurgen Klopp, as his team's flimsy Premier League title defence crumbles.

Chelsea remain in fourth for now as Tuchel is unbeaten in seven games since replacing the sacked Frank Lampard last month.