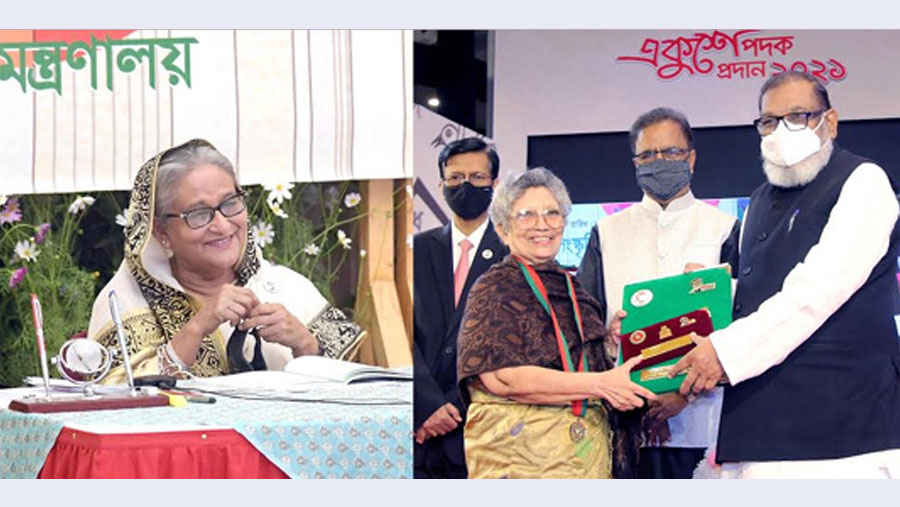 Prime Minister Sheikh Hasina today handed over the prestigious “Ekushey Padak-2021” among 21 eminent persons on the eve of Amar Ekushey and the International Mother Language Day. The premier distributed the Ekushey Padak (award), the second highest civilian award in Bangladesh, at a function at Osmani Memorial Auditorium in Dhaka, joining virtually from her official residence Ganabhaban, local media reported.

The awardees are: Motahar Hossain Talukdar (posthumous), Shamsul Haque (posthumous) and Advocate Afsar Uddin Ahmed (posthumous) for their roles in the Language Movement.

On behalf of the Prime Minister, Liberation Affairs Minister A K M Mozammel Haque handed over the awards among the winners. With State Minister for Cultural Affairs K M Khalid, MP, in the chair, Secretary of the ministry M Badrul Arefin delivered welcome address. Cabinet Secretary Khandker Anwarul Islam conducted the award-giving ceremony and read out the citations of the awardees, organized by the Ministry of Cultural Affairs.

The government announced the names of the Ekushey Padak-2021 winners on Feb 4.

The Ekushey Padak was introduced in memory of the martyrs of the Language Movement of 1952.

The award is given to individuals and organizations in recognition of contributions to a number of fields including the War of Liberation, literature, music, education, journalism, poverty reduction, research, and visual arts.

The Ministry of Cultural Affairs confers the award with a gold medal, a certificate of honor and cash.

The nation is set to observe the “Amar Ekushey and the International Mother Language Day” on Feb 21 to pay glowing tributes to the Language Movement martyrs who made supreme sacrifice for the cause of the mother tongue on this day in 1952.