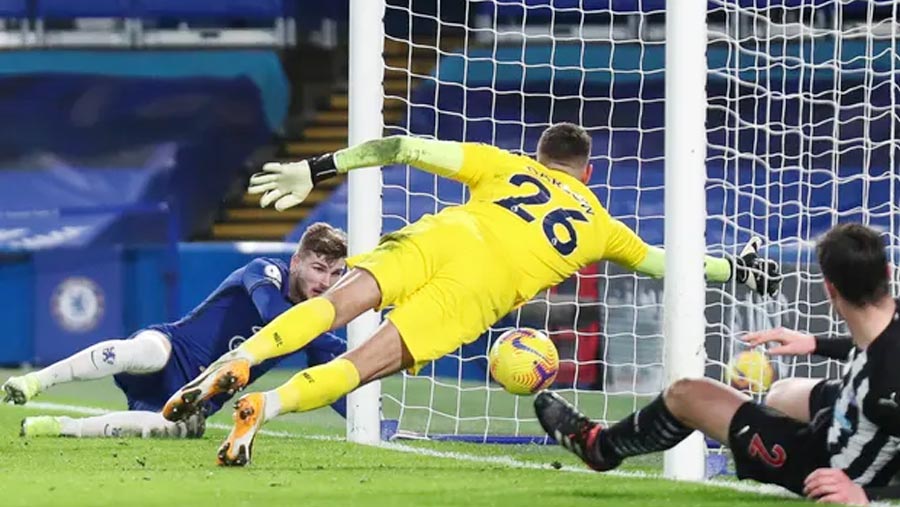 Chelsea climbed back into the top four with a comfortable 2-0 win over Newcastle United at Stamford Bridge on Monday (Feb 15) night in the Premier League. Thomas Tuchel remains unbeaten in charge of the Blues, now at six games, and are now in fourth spot on goal difference.

Timo Werner scored and assisted as he ended a 14-game goal drought to help Chelsea to victory over Newcastle in the Premier League at Stamford Bridge.

Werner's cross rebounded out to Olivier Giroud to net Chelsea's opener in the first half, after the France striker replaced the injured Tammy Abraham.

Summer signing Werner then made it 2-0 eight minutes later, scrambling in a flick-on at the back post.

Victory sees Chelsea move back up to fourth place, ahead of West Ham.

The Hammers, who comfortably beat Sheffield United earlier on Monday night, are level on points with Chelsea but both sides sit above defending champions Liverpool as competition for Champions League places heats up.

"We knew we had the opportunity to jump into the top four," Tuchel told BBC Sport. "We took this chance and the guys get a well deserved two days off now.

"There was a big gap between us when we started. It's not over. Now we've made it and it's the moment to hang in and keep on showing the hunger we had. We've made this big step today. We have to follow up and not lose any intensity or determination."