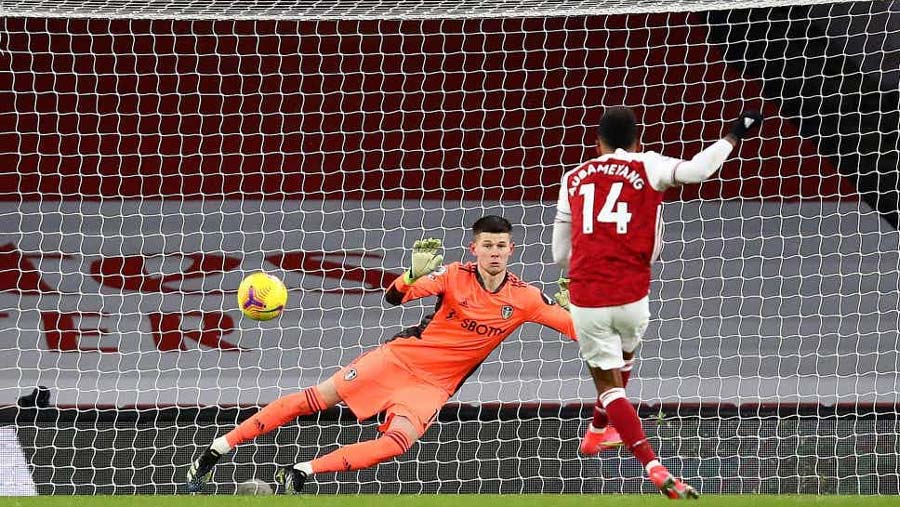 Arsenal captain Pierre-Emerick Aubameyang scored his first Premier League hat trick to guide his side to a 4-2 win against Leeds United at the Emirates on Sunday (Feb 14).

Hector Bellerin scored his first goal since January 2020 to bring it to four but Arsenal nerves were on edge as Leeds United claimed back two second half goals through Pascal Struijk and Helder Costa.

"I'm happy with performance. I knew it'd be a hard game, they never gave up," Aubameyang said after the game.

"The hat trick means a lot to me. I'm a guy who always works hard. It's been a tough time for me.

"Everyone was giving a lot of love to me, my mum and my family. I have to say thank you to everyone at the club and the fans."

Aubameyang's skills were on show for his first goal on 13 minutes as he confused the Leeds United defence with his footwork before getting his shot away into the bottom left corner.

Stuart Attwell awarded Arsenal a penalty on 34 minutes after Buyako Saka was brought down under a clumsy Liam Cooper challenge.

However, VAR asked Attwell to go back and look at the challenge and it was rescinded as the referee found Saka went down too easily, much to the ire of Mikel Arteta and his team.

Leeds United didn't learn from their early let off though and barely five minutes later Illan Meslier brought Saka down in the box and Attwell awarded a penalty.

Aubameyang made no mistake with his strike and scored his 200th European league goal.

Arsenal's third came from poor defending in the Leeds box which allowed the London side to pass the ball around until Dani Ceballos found Bellerin who hammered a low ball past Meslier.

One of the few bright spots in Arsenal's season has been the revelation of Saka and Emile Smith-Rowe and both teamed up for Aubameyang's third goal with Saka charging down the pitch before Smith-Rowe floated a ball into the box which the skipper headed into the net.

Leeds continued to search for a goal, however, and Struijk found the opening on 58 minutes when he jumped above David Luiz to guide the ball past Bernd Leno.

Their second came on 69 minutes as Costa was left in too much space and fired in a right-footed shot into the bottom left corner.

"We have been missing Pierre-Emerick Aubameyang's goals and him at his best," Areta said after the game.

"He as been training after difficult period with a family issue and we had a feeling he could be key in this game. He was in pain and got a big kick, twisted his ankle but hopefully he will be fine (for Thursday).

"I'm very pleased with the result and very, very happy with the performance against a fantastic team that makes life so difficult for you. We handled the situation well."