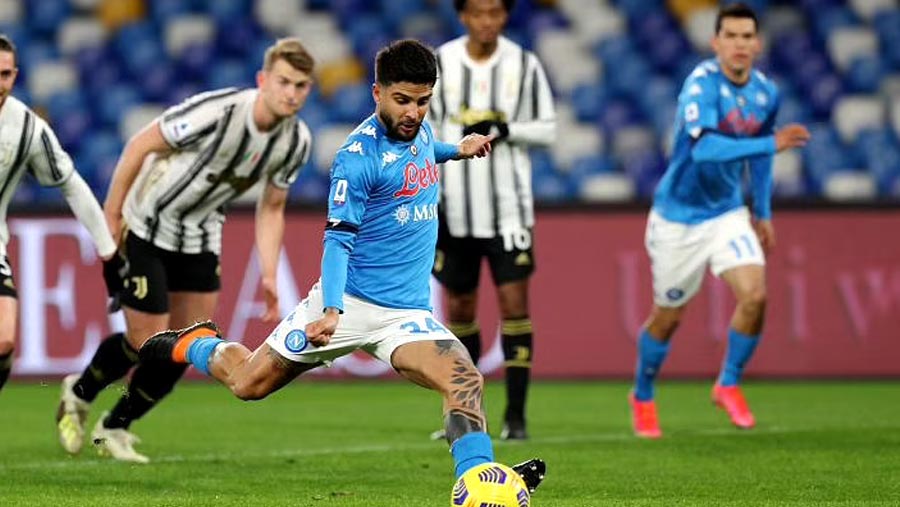 Serie A leaders AC Milan were stunned 2-0 by Spezia on Saturday (Feb 13) to give Inter Milan the chance to leapfrog them.

Having already beaten AS Roma in the Coppa Italia and Napoli in the league since the turn of the year, Spezia, making their Serie A debut this season, scored twice through Giulio Maggiore and Simone Bastoni, both in the second half, to seal a surprise success.

Milan never got going and finished the match without having had a shot on target, while being completely outplayed by their opponents.

Spezia saw out the win with ease to move up to 14th in the standings on 24 points, with Milan facing the prospect of losing top spot to rivals Inter, should Antonio Conte's side beat Lazio on Sunday (Feb 14).

Lorenzo Insigne's penalty earned Napoli a 1-0 win over Juventus. Veteran defender Giorgio Chiellini was penalised for a foul on Napoli's Amir Rrahmani in the penalty area to concede a 31st-minute spot-kick, which Insigne converted to score what proved to be the winner and his 100th goal in all competitions for Napoli.

Juventus looked a shadow of their normal selves offensively in the first half but improved after the break, with Federico Chiesa denied by a fine save from Napoli goalkeeper Alex Meret.

Cristiano Ronaldo was having an off day in front of goal, missing a glorious chance with his head late on to snatch a point, with Napoli seeing out the win to move into fourth on 40 points, two behind Juventus in third.

Torino drew a fifth successive match as they were held by fellow strugglers Genoa in a 0-0 draw.

Genoa defender Davide Zappacosta almost scored against his old club but his effort came off the post. Torino are now two points above the drop zone.

Genoa are 10 points clear of danger after an impressive run since coach Davide Ballardini took charge in December.