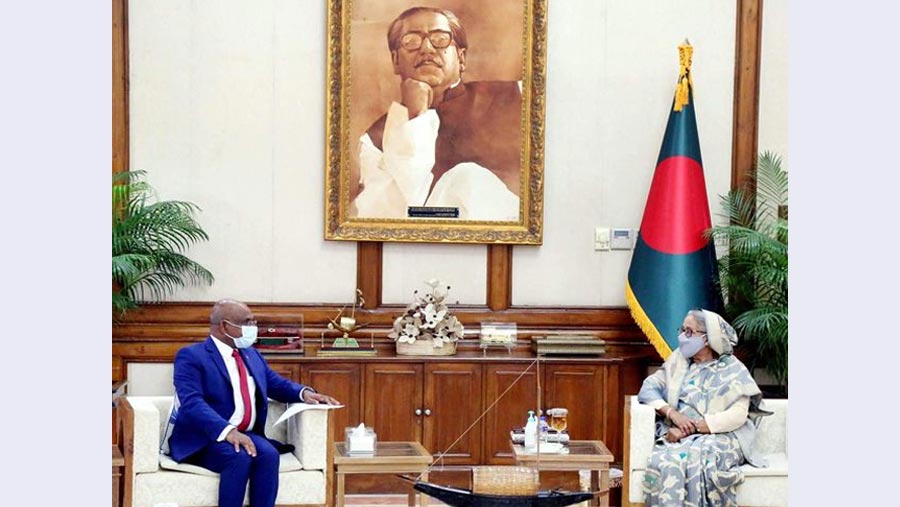 Prime Minister Sheikh Hasina on Wednesday (Feb 10) assured visiting Foreign Minister of the Maldives Abdulla Shahid that Bangladesh would extend its all-out support to his country in the fight against climate changes. She gave this assurance when Abdulla Shahid paid a courtesy call on her at her official residence Gananbhaban in Dhaka, local media reported.

“As the Chair of the Climate Vulnerable Forum, Sheikh Hasina assured that Bangladesh would extend the highest possible support to the Maldives in facing the adverse impacts of the climate changes,” said Prime Minister’s Assistant Press Secretary MM Emrul Kayas.

The premier said Bangladesh had designed and is now implementing its own “mitigation” and “adaptation” plans to combat the adverse impacts of climate change.

The visiting Maldivian foreign minister expressed the willingness of his country’s government to regularize a good number of undocumented Bangladeshis living in the Maldives following due procedures.

He also told the PM that the Bangladeshis who are staying in the Maldives will get free vaccination against Covid-19.

Noting that Bangladesh sheltered over one million Rohingya people, the Prime Minister said necessary activities are continuing to relocate a significant number of the forcibly displaced Myanmar nationals to Bhashanchar.

Highlighting her government’s development activities, she said not a single person will remain landless and homeless in Bangladesh.

Referring to the two Memorandums of Understanding (MoUs) signed on Tuesday between Bangladesh and the Maldives, the PM expressed her satisfaction over signing of the two documents during his visit.

He said the Bangladesh Prime Minister is an important leader not only in Bangladesh or South Asia but also in the entire world.

The visiting foreign minister said the President of the Maldives thanked the Prime Minister for inviting him to attend the celebration function of the Independence Day of Bangladesh in the Mujib Barsho.

Showing respect to Father of the Nation Bangabandhu Sheikh Mujibur Rahman, he said Bangabandhu was a great leader not only for Bangladesh but also for the whole world.

The foreign minister also expressed gratitude to Bangladesh for extending medical assistants to the Maldives in the fight against Covid-19 pandemic.