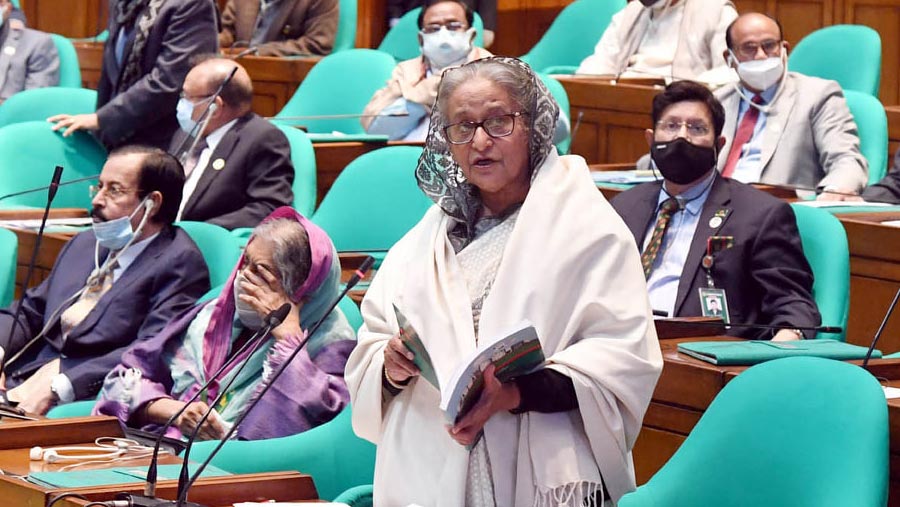 Prime Minister Sheikh Hasina on Tuesday (Feb 2) said in parliament that Bangladesh Awami League gained the people’s trust and confidence by rendering services and doing welfare and development, which is reflected in the local government elections.

“As people have received services from the Awami League government alongside the country’s ongoing development and their welfare, Awami League has naturally achieved people’s trust and confidence and we saw its reflection in the local government elections,” she said.

The Leader of the House made this remarks during her valedictory speech at the eleventh session of the 11th Jatiyo Sangsad. Speaker Dr Shirin Sharmin Chaudhury chaired the closing sitting, local media reported.

Pointing out that BNP is facing lack of leadership, Sheikh Hasina said people don’t keep their trust and confidence in a political party when its leader becomes a fugitive convict.

She questioned how a party (BNP) would work for people as it made the country champion in corruption five times in a row during their regime in 2001-2006 and when their leaderships become convicted for corruption, embezzled fund of orphans and backed 10 trucks of arms smuggling and grenade attack on the then opposition party in daylight.

She went on saying: “People have no trust and confidence in them (BNP).”

The PM said Bangladesh is moving ahead and will continue its advancement frustrating the enemies and defying all conspiracies at home and abroad.

“It’s the ultimate satisfaction when people reap the benefit of the works that are carried out with honesty,” she said, adding a country might be turned into a developed one when anyone works with honesty and sincerity.

Sheikh Hasina said Bangladesh would be the hunger and poverty-free and prosperous “Shonar Bangla” as dreamt by the Father of the Nation Bangabandhu Sheikh Mujibur Rahman.

Sheikh Hasina said the government has constructed the Padma Bridge with own financing but BNP leader Begum Khaleda Zia could not appreciate it, rather she commented that the bridge has been made in hodgepodge and asked the people not to use it.

“If they don’t use the bridge, how will they cross the river? Ten they have to board on boat,” she said, adding, “Our boat is large so there is no problem. We would take all but after scanning so that none could drill the boat”.

Sheikh Hasina asked the critics to visit the Padma Bridge starting from Dhaka to Munsiganj site to see the highway whether they feel it is Bangladesh or somewhere else.

Referring to the Dhaka-Chattogram four-lane highway and marine drive in Cox’s Bazar, she said the government has proven it that development is possible if there is any honest endeavor.

Highlighting her government’s measures to offset the impact of Covid-19 pandemic, the Prime Minister said they have issued 31 health directives and offered Tk 124,053 crore stimulate packages under which people from different walks of live have received financial assistance.

She mentioned that the government had booked the Covid-19 vaccine paying in advance since the beginning of its research so that it could be possible to bring the vaccine in the country whenever it is invented and approved by WHO for use.

The head of the government said many criticisms and mockery were passed but vaccine has arrived in the country and inoculation has already started, and she hoped the critics have already got the answer.

She said no adverse reaction was seen after the primary inoculation and the regular vaccination is going to start in Feb 7-8 as the vaccine has already reached all districts.

For dealing with the Covid-19 pandemic, Bangladesh has received applause internationally but only not heard it from inside the country, she added.

The premier also said that the government has already finalized the vaccination roll out plan and categories of people who would get it.

“Those who would receive inoculation have to wear facemasks and maintain all health protocols until the world becomes free from the Coronavirus.”

Regarding the HSC result, she said the result would give some relief to the students who are not able to go to schools and colleges due to the pandemic. School-college would be reopened after further improvement of the coronavirus situation, she added.

During the pandemic, she said, the government continued to distribute text books free of cost among the pre-primary to secondary students along with education stipends to two crore students.

The premier said the government has appointed 2,000 physicians and 6,000 nurses, health workers and laboratory technologists to provide treatment during Covid-19.

Mentioning that 99 percent people of the country are now getting electricity, she said no people would remain homeless in Mujib’s Bangladesh.

To cope up with the challenges of the fourth industrial revolution, Sheikh Hasina said AL’s CRI and Young Bangla alongside the government are providing training to youth population to build up them as skilled manpower.