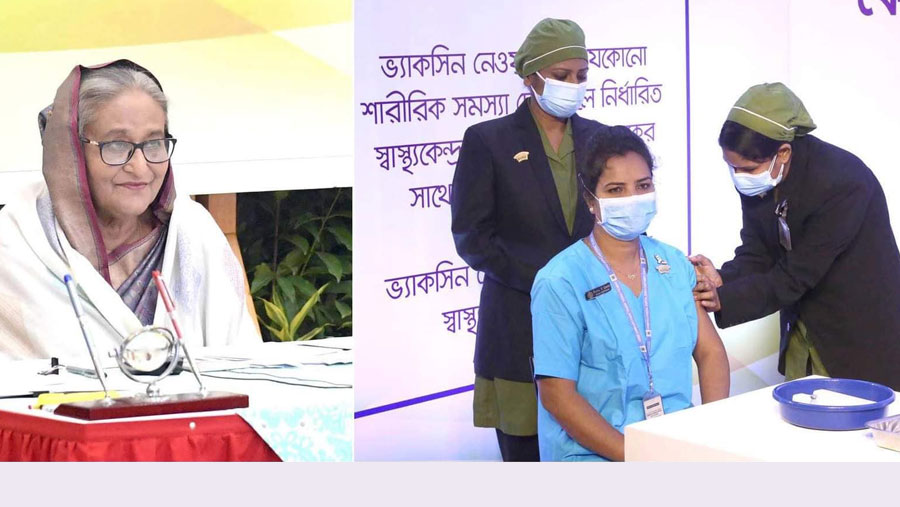 Prime Minister Sheikh Hasina on Wednesday (Jan 27) opened the nationwide Covid-19 vaccination campaign with a nurse and four other government officials being first recipients of the shots as frontline workers.

“You are not frightened, are you?” Sheikh Hasina said as a medical official prepared to inject her the inoculate at the state-run health facility which was one of the first designated Covid hospitals in the country.

Runu in response showed a negative gesture earning the premier’s appreciation who commented “a brave girl”.

“Many greetings to you, stay healthy and serve many more patients,” Sheikh Hasina said.

All of them greeted the premier raising their hands after receiving the shots and saying “Joy Bangla, Joy Bangabandhu”.

“We want protection of all from the coronavirus. I want to say to you all to work with sincerity to make the Covid-19 vaccination a success. We want cooperation from all as everything will go well to this end,” Sheikh Hasina said in her inaugural comments.

“This is a historic day.”

She said the vaccination programme was initiated strictly following World Health Organization (WHO) guidelines and protocols while Bangladesh appeared as one of forerunner countries to launch the inoculation campaign.

“Many countries of the world are yet to start the vaccination. But, we have started it despite a country of vast population and limited resources,” Sheikh Hasina said.

Yet, she said, some people were out to criticize the initiative as “they have developed a disease of feeling not good anything better for the nation”.

“They are feeling unwell when good things happen. Feeling unwell is a disease. I don’t know whether there is any treatment or vaccine for the disease,” Sheikh Hasina said.

The premier said ahead of the inoculates arrival these people said that Bangladesh would not get the vaccines and now when the shots came these people started spreading fears saying vaccines have side effects.

Officials said over 20 people including doctors, nurses, health workers, members of law enforcement agencies and armed forces and journalists were inculcated on the first day of the drive.

Officials familiar with the process said the vaccine receivers would be kept under medical observation for seven days a timeline which would be followed by the nationwide vaccination campaign on Feb 7, the health ministry said.

Bangladesh received its first ever Covid-19 vaccine consignment on Jan 21 (Thursday) as India sent 20 lakh doses of vaccine developed by the University of Oxford and AstraZeneca as gift.

The first consignment of Covid-19 50 lakh Oxford-AstraZeneca vaccines purchased by the government landed in Dhaka on Jan 25.

The total vaccine doses stand at 70 lakh doses now while a priority list of recipients was prepared by now with officials saying they included 452,027 government health workers and approved 600,000 private health workers who were directly engaged in the Covid-19 health services.

The other priority groups includes 210,000 freedom fighters, 546,620 members of the frontline law enforcement agencies, 360,913 members from the military and civil defense forces, 50,000 officials and employees working in the offices which are indispensable for governing the state.

The premier earlier unveiled the detailed vaccine roll-out plan in parliament saying “in the first phase of vaccine distribution, a total of 1.50 crore people (8.86pc of population) will get two doses of inoculation over a span of two weeks”.

She said Bangladesh would get 6.80 crore vaccines for 20 percent of its population or 3.40 crore people from the WHO, COVAX facility.

The vaccine will be preserved in 64 district EPI stores and 483 EPI stores across the country.

Sheikh Hasina said her government set a target to collect the Covid-19 vaccine since it is ready and they have made a separate allocation of Taka 1000 crore to this purpose as their priority is to save the lives of the people.

“I have asked the health ministry to knock every corner across the globe possible to get the Covid-19 vaccines when researchers were going on to develop those. I have made a separate allocation of Tk 1000 crore to purchase the vaccines,” she said.