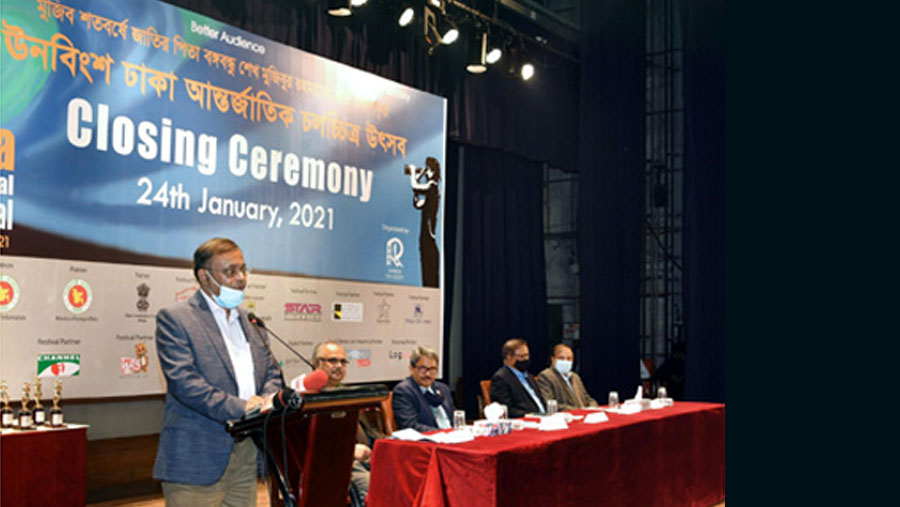 Information Minister Dr Hasan Mahmud on Sunday (Jan 24) said the day is not so far when the films of country will compete and occupy a dignified position in the global platform.

The film industry, which was established by Father of the Nation Bangabandhu, will not only get back its golden era, but it will also compete in the world cinema market capturing a dignified position in the global platform under the supervision of Prime Minister Sheikh Hasina,” he said, addressing the concluding ceremony of the 19th Dhaka International Film Festival at the auditorium of National Museum in Dhaka.

Hasan thanked and congratulated the organisers for organizing the festival through virtual and in open stage amid the prevailing Covid-19 situation.

The minister said Bangladesh’s position is third among 22 countries which achieved positive GDP during the Covid-19 situation. And, the position of the country (Bangladesh) in combating coronavirus is in top in South Asia and 20th across the globe, said Hasan, also Bangladesh Awami League joint general secretary.

Terming the film as reflection of time and civilization, he said many films (surely) will be made about corona and those will keep this time in the pages of history.

KM Khalid said Rainbow Chalachithra Sangsad has been promoting the culture of Bangladesh abroad since 1977 by showing good films and distributing them internationally. Despite the financial crisis and unfavorable situation, the organization did not back away from organizing the festival this time, he added.

For this, he said, they deserve applause undoubtedly and the Ministry of Culture will try to alleviate the financial crisis of the organizers.

One of the organizers, Shahriar Alam said his ministry has been involved with the festival since its inception. He said such film festivals will helpful in brightening the image of the country abroad.

Later, the guests handed over awards to the awardees while ‘Road to Aden’ of Kirgizstan awarded as best film and ‘Gandi’ as famous film.