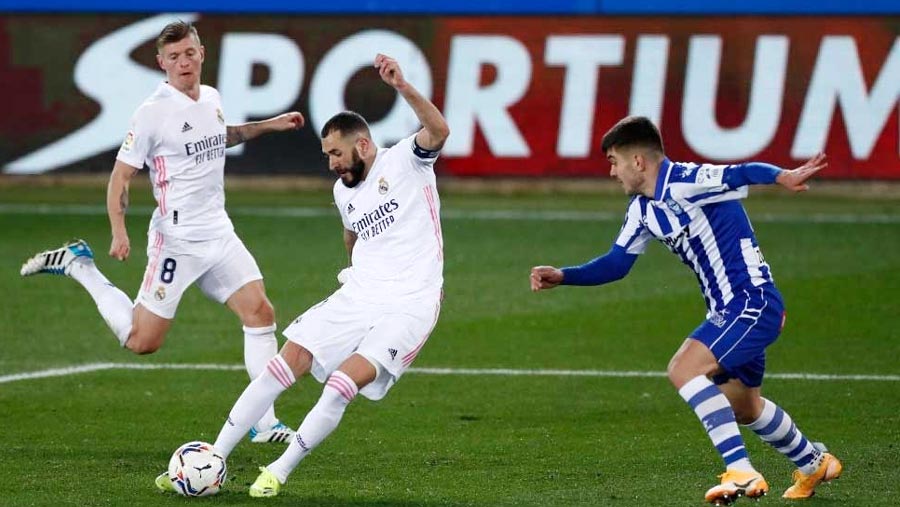 Real Madrid produced one of their best performances of the season in a much-needed 4-1 win over Alaves to ease the pressure on Zinedine Zidane after back-to-back defeats.

Zidane was forced to watch the game from home after testing positive for Covid-19 on Saturday (Jan 23) meaning assistant David Bettoni took the Spanish champions on their trip to Mendizorroza.

Real Madrid didn’t much miss the Frenchman in the dugout, though, as they dominated from the start, with Casemiro opening the scoring after just 15 minutes, heading into the back of the net from a Toni Kroos corner kick.

Benzema made it 2-0 when he lashed home following an exceptional dummy by Eden Hazard to create space and the Belgian scored one of his own on the stroke of half time, finishing off a Toni Kroos threaded pass from deep.

Alaves gave themselves a lifeline on the hour mark, with Joselu powering a header past Thibaut Courtois from a Lucas Perez freekick delivery, but a second Benzema goal saw Real Madrid reassert themselves against the club celebrating their 100th birthday.

The result eases some of the pressure on Zidane who had seen his Real Madrid team suffer damaging defeats to Athletic Club in the Spanish Supercopa and lower league Alcoyano in the Copa del Rey.