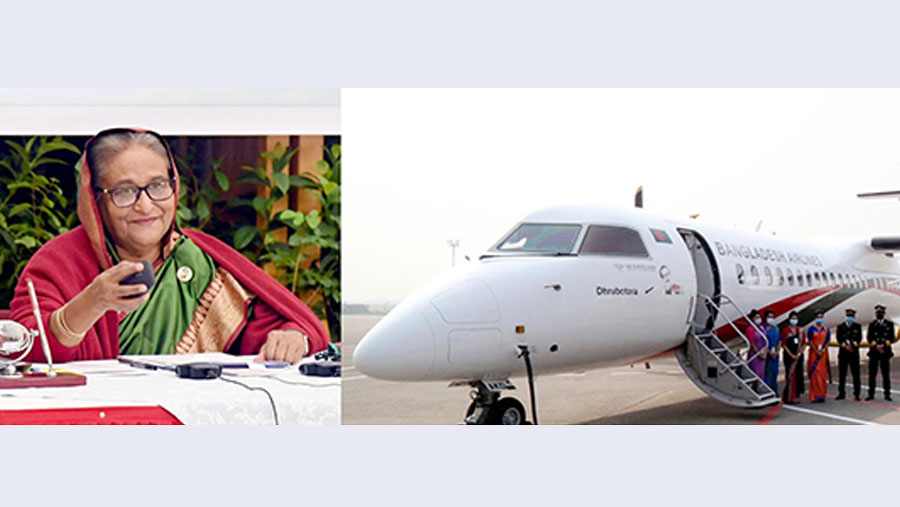 “We want to establish strong connectivity with neighboring countries... working on this goal and I think this inclusion (aircraft) of Biman will be helpful in future,” she said.

Sheikh Hasina said the Awami League government in its first tenure in 1996 had upgraded the Chattogram and Sylhet airports as international ones while developed the Hazrat Shahjalal International Airport massively.

“Now, we are upgrading Cox’s Bazar and Syedpur airports as international ones while construction works of third terminal of Hazrat Shahjalal International Airport and expansion of Sylhet international airport is going on, and the remaining work will be done gradually,” she said.

“I have selected these names and my younger sister Sheikh Rehana helped me in it,” she added.

Earlier, the national flag carrier received the first Dash 8-400 aircraft out of three made by De Havilland Aircraft of Canada, a prominent aircraft-maker of the North American country.

The Dash 8-400 aircraft, equipped with eco-friendly and state-of-the-art facilities, arrived here on Nov 24.

Biman procured the three Dash 8-400 aircraft under the G2G (government-to-government) agreement between the Bangladesh and Canadian governments.