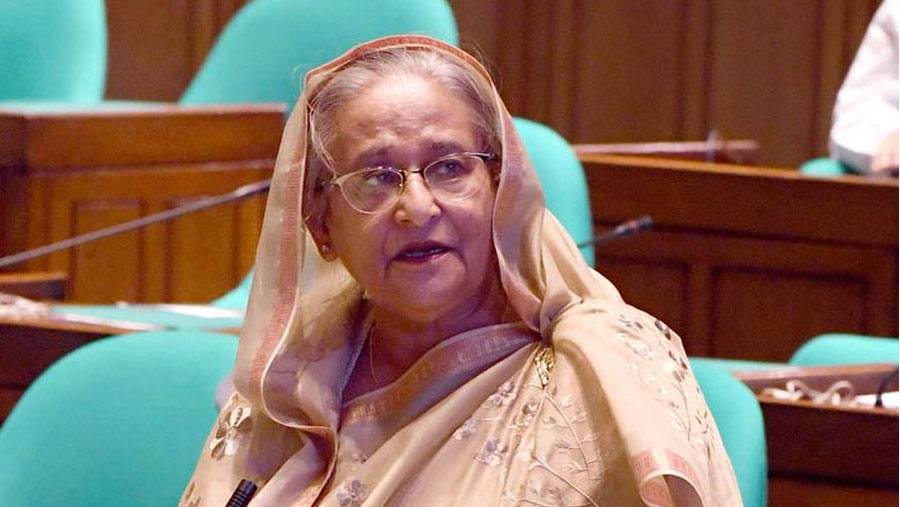 Prime Minister and Leader of the House Sheikh Hasina on Wednesday (Nov 18) told the Jatiyo Sangsad that her government, since the very beginning of Covid-19 outbreak, has been working relentlessly to tackle the lethal virus and revive the economy by providing incentives.

Describing the present government as a people oriented government, she said the government’s incentive played a very significant role to tackle the adverse effect of the Covid-19 at all strata of life.

The PM told this in the parliament while responding to a star-marked question of treasury bench member Md Mahfuzur Rahman during her stipulated ‘Question and Answer Session’ tabled in the House.

Speaker Dr Shirin Sharmin Chaudhury chaired the sitting in the 10th session of the 11th Jatiyo Sangsad in the evening, local media reported.

Sheikh Hasina said the present government led by Bangladesh Awami League has undertaken various steps to expand trade and commerce, including increasing production in industrial sector, in order to revive the economy affected by the coronavirus.

Referring to a survey on Covid-19 and Bangladesh’s Livelihood Impact, conducted by the Bangladesh Bureau of Statistics, she said, the government assistance or relief has played an effective role in tackling the financial crisis during the pandemic.

The PM said the government, due to the Corona crisis, has announced 21 incentive packages worth about Tk. 1,12,833 crore to protect the lives and livelihoods in different sectors, classes and professions of the country, which is also 4.3 percent of the total GDP.

She observed that the initiative of providing cash incentive to some 19 conventional and non-conventional products was to bring dynamism in the country’s export trade.

“This initiative will create new jobs... In addition, regular monitoring is being carried out to keep the country’s e-commerce activities on the run as well,” she added.

Sheikh Hasina said the supply of fund was increased to maintain liquidity in the economy so that the day-to-day business can run smoothly to cope with the financial shock caused by the virus.

Sheikh Hasina said, “Bangladesh Bank has already reduced the CRR (Cash Reserve Ratio) and the Repo rate by 0.5 percent to increase money supply. And this will continue if necessary.”

At the same time, she mentioned that her government also gave a special attention to control inflation.

Replying to another query of Didarul Alam of Chattogram-4, Sheikh Hasina said although the Coronavirus incidence has decreased a little bit at present in the country, experts apprehend that it may increase in the winter.

Noting that extensive preparations were made to deal with the second wave of Covid-19 in the winter, she said, the authorities concerned have been asked to implement a “no-mask, no-service policy” so that corona cannot spread further.

She told the JS that as per the action plan taken to prevent and control the lethal virus, screening still continues at all entry points in the country while a-14-day quarantine has been made mandatory for foreign returnees.

About the Covid-19 vaccine, the PM said, the government in the meantime has signed a tripartite agreement with Serum Institute of India and Beximco Pharmaceuticals to import 30 million doses of vaccines.

In reply to a query of the treasury bench member AKM Rahmatullah, she said, the World Bank has provided 105 million U.S. dollars for the employment during the Corona crisis.

“The Asian Infrastructure Investment Bank has approved a loan of 100 million U.S. dollars for us,” the leader of the House added.

Replying to a question of opposition bench from Fakhrul Imam, the PM said, all law enforcement agencies, including the police, remain vigil round-the-clock to bring all those who were involved in sabotage and violent acts under the law.