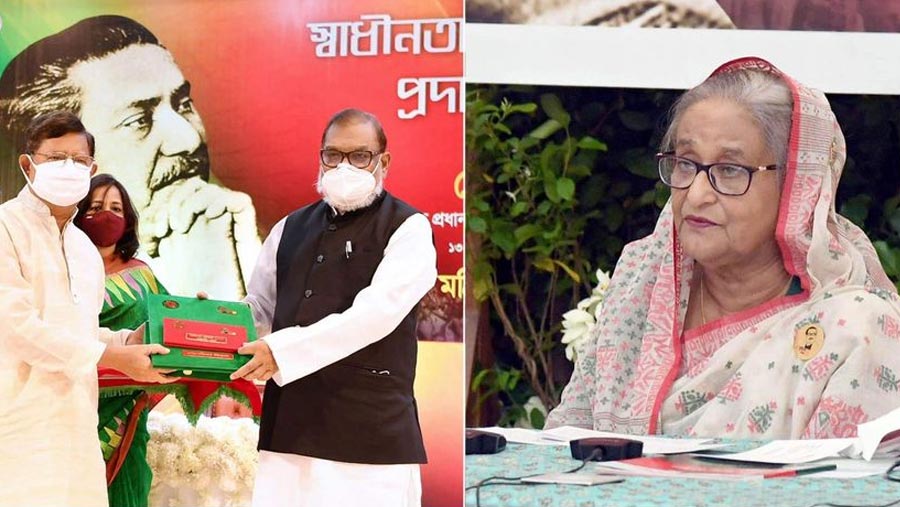 Eight renowned personalities and one organisation on Thursday (Oct 29) received the ‘Swadhinata Purashkar 2020’ (Independence Award 2020), the highest state honour given in recognition of their remarkable contributions to the nation.

On behalf of Prime Minister Sheikh Hasina, Liberation War Affairs Minister AKM Mozammel Haque handed over the prestigious award to the awardees and their relatives at a function held at the Osmani Memorial Auditorium in the city.

The PM joined the function through a videoconference from her official residence Ganabhaban, local media reported.

Cabinet Secretary Khandker Anwarul Islam conducted the function and read out the citations of the Independence Award recipients with their brief life sketches.

Dr AKMA Muqtadir, on behalf of the award recipients, spoke on the occasion.

On Feb 20, the government picked the renowned personalities and organisation for the highest state award in recognition of their outstanding contributions to their respective fields.

There is a tradition to hand over this prestigious award to its recipients on Mar 25, but this year it was not possible due to the outbreak of Covid-19 pandemic.

Since 1977, Bangladesh has been recognising  individuals and institutions with the award every year ahead of the Independence Day.

Ministers, the chiefs of the three services and members of parliament were present at the function.