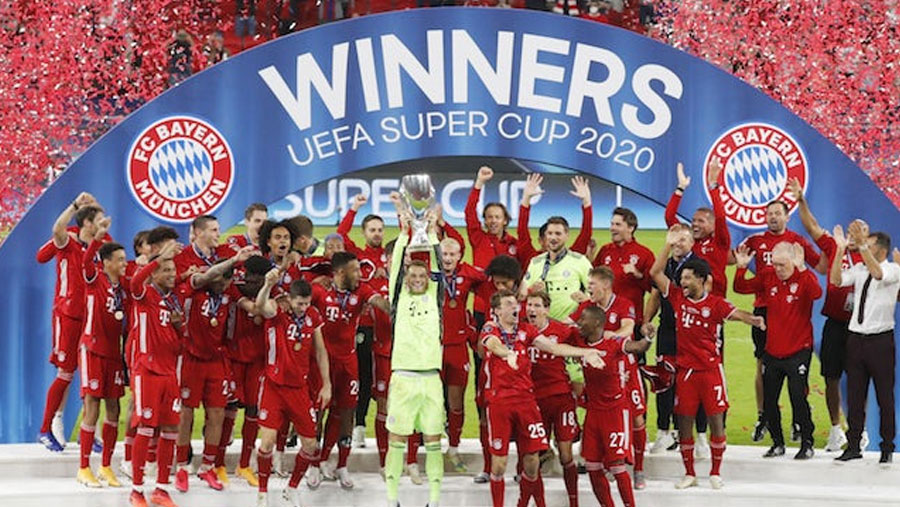 Bayern Munich beat Sevilla 2-1 after extra time on Thursday (Sep 24) to lift the UEFA Super Cup and complete a quadruple under coach Hansi Flick, in the first European game played with some fans in the stands since the sport returned amid the Covid-19 pandemic.

Bayern Munich were taken to extra time by a durable and resilient Sevilla in front 15,180 fans in Budapest before adding the UEFA Super Cup to their Champions League trophy.

The showpiece was watched by supporters inside the 67,000-capacity Puskas Arena, the first major European match to allow fans since the coronavirus pandemic forced the game into lockdown.

And they witnessed a hard-fought encounter which saw Sevilla take the lead from the penalty spot on 13 minutes when Lucas Ocampos scored an outrageous "no look" penalty after Ivan Rakitic was bundled over by David Alaba.

Bayern equalised before the break, Leon Goretzka scoring from Robert Lewandowski's superb touch, with both sides having opportunities to win after the break.

Lewandowski and Leroy Sane saw goals chalked off for Bayern but the biggest chance fell to Sevilla substitute Youssef En-Nesyri in the closing moments, seeing his shot touched away by Manuel Neuer with only the keeper to beat.