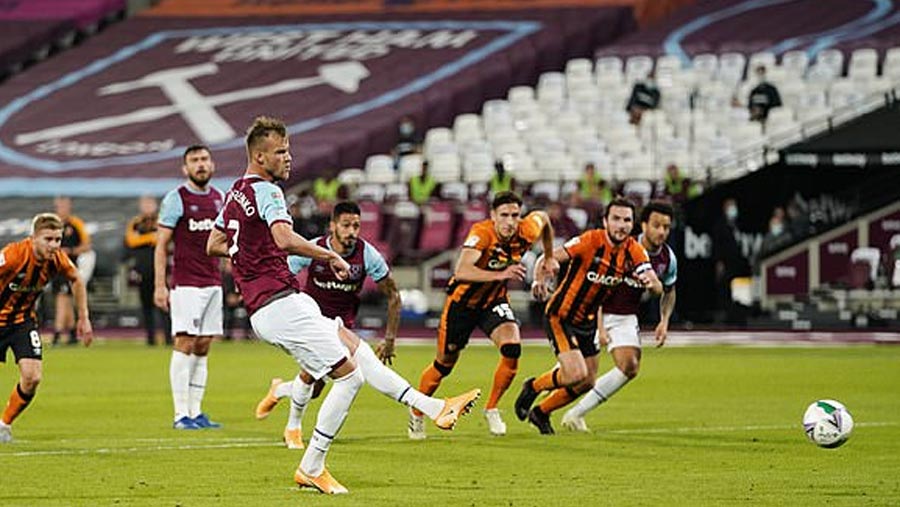 West Ham United cruised into the fourth round of the Carabao Cup with an emphatic win over League One side Hull City. Sebastien Haller and Andriy Yarmolenko both netted twice for the hosts, after Robert Snodgrass had opened the scoring.

Mallik Wilks scored a second-half consolation goal for the visitors.

West Ham will now travel to Fleetwood or Everton in the fourth round, with ties due to take place in the week commencing Sep 28.

Diop and Cullen had both been set to start for the Hammers, who named a completely different XI from Saturday's Premier League defeat at Arsenal.

Their withdrawal led to Jack Wilshere making his first start in 2020 and a full debut for Scotland Under-19 midfielder Harrison Ashby, as debutant Ajibola Alese moved into central defence.

And it proved a relatively comfortable evening for the hosts once Snodgrass had collected Yarmolenko's pass and found the bottom corner from 15 yards.

Ukraine winger Yarmolenko was influential throughout, laying on an easy finish for Haller before scoring from the spot and tapping in Felipe Anderson's late cutback.

In between, Haller showed his composure to score his second of the night after rounding Hull goalkeeper George Long.