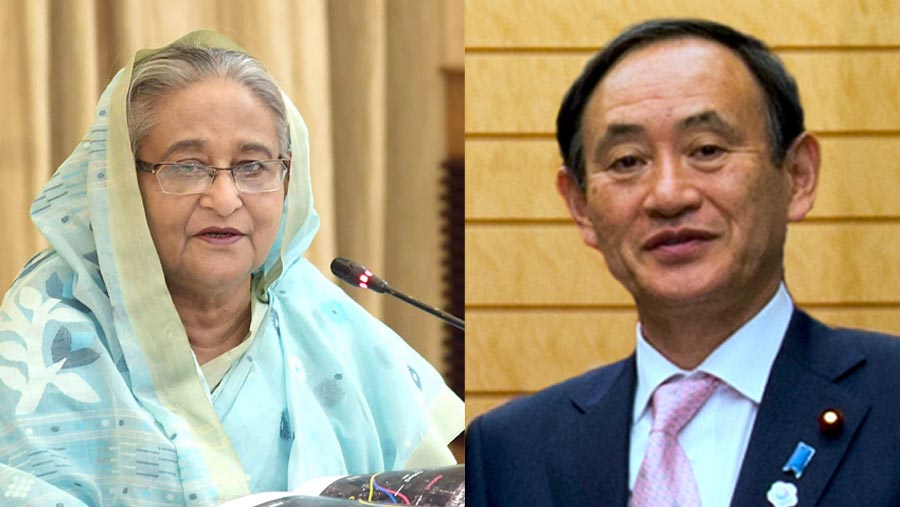 Prime Minister Sheikh Hasina on Wednesday (Sep 16) extended her heartiest congratulations to Yoshihide Suga on his appointment as the Prime Minister of Japan, saying that she is looking forward to working in a closer tie with the new Japanese premier.

“On behalf of the government and people of Bangladesh and my behalf, I would like to extend our heartiest congratulations and warmest felicitations on Your Excellency’s appointment as the Prime Minister of Japan,” Sheikh Hasina said in the message.

“Your (Yoshihide Suga) election is the testimony of your dynamic leadership, tenacity, and trust by the ruling Liberal Democratic Party (LDP) and the people of Japan,” she said.

The PM said: “The people of Bangladesh join the friendly people of Japan at this august moment to appraise your pledges in keeping a good balance between fighting the coronavirus pandemic and promoting economic activities.

“The people of Bangladesh also values to carry out your visionary policies relating to the welfare of the Japanese people, and positive gesture towards regional and international peace,” she said.

“Particularly over the last decade, both of our governments came so closer under the auspices of a comprehensive strategic partnership to reinforce and enhance mutual development initiatives for the two peoples,” she said.

Expressing deep gratitude for the continued support of Japan, the premier said: “At the same time I also would expect perpetuity of the same under your able stewardship.”

In this regard, Sheikh Hasina said she is looking forward to working in a closer tie with the new Japanese prime minister to further engagements between the two counties in all spheres of cooperation.

The PM extended her invitation to new Japanese premier to visit Bangladesh at an early and opportune time.

Sheikh Hasina wished the Japanese premier good health, long life and happiness, and the continued peace, progress, and prosperity of the friendly people of Japan.