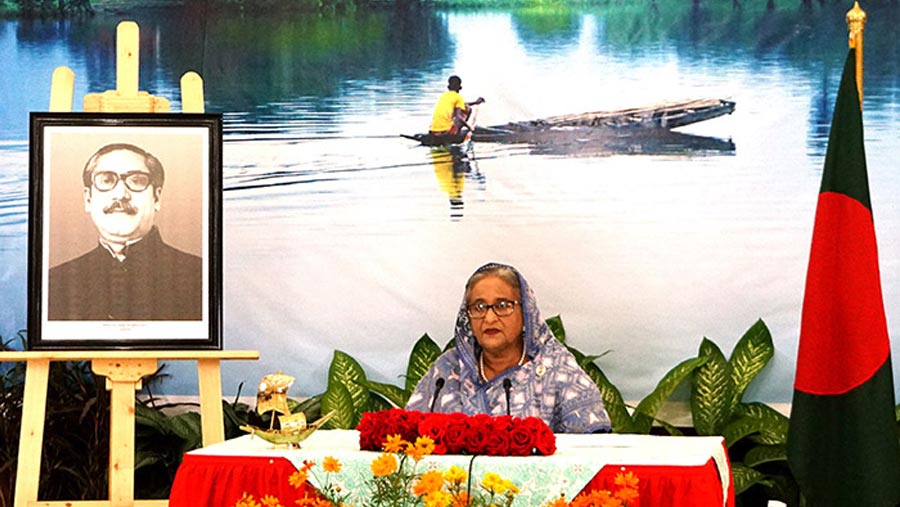 Prime Minister Sheikh Hasina on Tuesday (Sep 15) sought a strong support from the international community and G20 to increase adaptation finance for the climate vulnerable countries.

“We seek strong support from the international community and G20 to increase adaptation finance for the climate vulnerable countries,” she said.

While delivering keynote speech virtually at a high level event on the occasion of the F20 Climate Solutions Week that began on Sep 14, the PM also placed three priority issues including greater collaboration from international community for unified, stronger and green mechanism to tackle the negative impacts of climate change and uphold sustainability.

The F20 and King Khaled Foundation are jointly organizing the week. The title of the event was “Resilience and Recovery: Highlighting Solutions for the G20 on Climate and Sustainability”, local meida reported.

Sheikh Hasina said G20 have greater responsibility to come forward with stronger commitment to mobilise global support to address the issue of displacement or climate refugees.

“Peace and security of all will largely depend on how we will be able to manage this forced displacement of innocent people,” she said.

The premier said that nobody knows it better than Bangladesh as it has 1.1 million forcibly evicted Rohingyas from Myanmar and they are causing extensive damage to the environment and nature.

“I will urge G20 countries to mainstream the issue of loss and damage as in many parts of the world, the environmental loss has become permanent and irreparable,” she said.

Sheikh Hasina said G20 must announce accelerated actions to reinvigorate global economy in the spirit of ‘building back better’ to achieve the Sustainable Development Goals (SDGs).

“We are still off track to achieve the SDGs by 2030. Covid-19 pandemic has further slowed us. Under these circumstances, G20 must announce accelerated actions to re-invigorate global economy in the spirit of ‘building back better’ and if I may add ‘greener’,” she said.

In this connection, she placed three issues of priority. These are:

Firstly, For successful implementation of 2030 Agenda, addressing climate change is fundamental as both have symbiotic relationships with each other;

Secondly, We need greater collaboration from international community for unified, stronger and green mechanism to tackle the negative impacts of climate change and uphold sustainability. G20 countries have specific roles to play here.

And thirdly, Global financing mechanism must be replenished as promised in a true spirit of responsibility sharing and partnership.

Sheikh Hasina also said that it is disturbing that the Global financing mechanism like the Green Climate Fund (GCF) and the Least Developed Countries Fund (LDCF) are severely under resourced.

She said that climate and sustainability, the two issues, are mutually dependent and the G20 economies account for around 90 percent of the gross world product, almost 80 percent of world trade, two-thirds of the world population and approximately half of the world land area.

“So, anything to do with global climate and sustainability must go through G20 for any satisfactory outcome. G20 has previously shown that jointly they can take many beneficial measures for the benefit of the global community.”

Mentioning that climate change is a global problem with cross border adverse impacts, the prime minister said it is the responsibility of the international community to take drastic measures to stop the activities that cause climate change.

Sheikh Hasina said climate change has originated from the lack of sustainability triggered by human activities. As a result, humans are experiencing floods, rainfalls, cyclones, heat waves, landslides and droughts in recent years with more fury and intensity.

She said that further increase of sea level, even for half a meter could threaten the very survival of many climate vulnerable countries “An ambitious collective response is a global emergency now and without the direct engagement of G20, nothing can be achieved to safeguard our children and their future,” she said.

“For that reason, the strict implementation of the Paris Agreement is critical. We seek collaboration and support from the international community, especially from the advanced economies, to redefine their production and consumption,” the premier added.

The premier said: “We must keep the increase of the global temperature within 1.5 degree centigrade and the G20 countries being the main emitters, should reset their NDCs accordingly.”

The PM mentioned that Bangladesh is now the host of the Global Center on Adaptation’s South Asian regional office which will promote adaptation measures.

She urged the international community, including G20, to come forward to invest in adaptation efforts.

Mentioning that Bangladesh is the current President of the Climate Vulnerable Forum-CVF, the prime minister said that Bangladesh is also at the forefront in combating the climate-induced disasters through implementing various mitigation and adaptation programmes.

“Millions of tree-saplings are being planted every year across the country to offset the impacts of climate change. Marking the birth centenary of Father of the Nation Bangabandhu Sheikh Mujibur Rahman, the government is planting 10 million saplings this year alone,” she said.

Sheikh Hasina said Bangladeshi scientists have developed saline, flood and drought resistant crops and floating agriculture technology. “We have been expanding the construction of cyclone shelters programme, first introduced by our Father of the Nation 45 years ago,” she said.

The premier said the government has been spending on an average US$ 2 billion, 1 percent of the GDP, per year since 2010 for adaptation purposes.

She also said that Bangladesh Parliament recently adopted a resolution titled ‘Planetary Emergency’ calling upon all other Parliaments to declare this existential threat as an emergency for all countries.