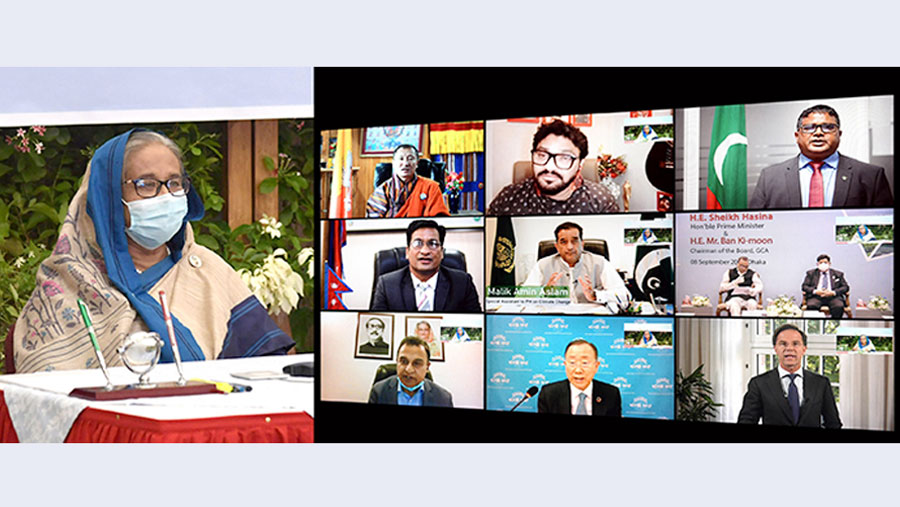 “As the climate change is a global affair, I would like to call upon the countries to enhance their Nationally Determined Contributions by December 31 this year in tackling the menace as well as implement the 2015 Paris Agreement,” she said.

The opening of the regional adaptation center in Dhaka has been dedicated to the birth centenary of Father of the Nation Bangabandhu Sheikh Mujibur Rahman.

The premier expressed the hope that this office will serve as a ‘Center of Excellence’ and a solution-broker for climate adaptation measures in this region.

“I hope this regional office will share best adaptation practices of Bangladesh as well as other countries and exchange practices within the region. It will serve as a Center of Excellence and a solution-broker for adaptation measures in the region,” she said.

Sheikh Hasina also expected that GCA Dhaka office would support us during the Chairmanship of Bangladesh to Climate Vulnerable Forum and Vulnerable-20, two climate-based important international bodies under the UNFCCC process – during next two years.

The premier simultaneously urged the GCA to explore the opportunity of supporting the Delta Coalition on a long-term basis.

Sheikh Hasina also called for greater cooperation and collaboration among the nations to fight the coronavirus impacts.

“The Covid-19 pandemic fallout calls for greater cooperation and collaboration among the nations. We should not leave each other rather forge unity to fight the current crisis or any such one in the future,” she said.

She said South Asia is the most vulnerable region to climate-induced natural disasters like cyclone, flood, tidal surge, drought, Glacial Lake Outburst Flood, landslides and avalanches. Even a 1.5 degree Celsius rise of temperature will have severe consequences for Bangladesh and the region.

“We also must not forget the vulnerability of the children, women, elderly people and people with special needs against disasters,” she added.

Sheikh Hasina said Bangladesh remains committed to implementing the Paris Agreement and adopting all the measures to prevent rise of temperature from the emission of GreenHouse Gases and other environmental degradations.

“We have established Bangladesh Climate Change Trust Fund in 2009, and so far allocated 430 million US dollars from our own resources to implement the action plan,” she added.

Sheikh Hasina said her government has also been spending about 1 percent of GDP equivalent to US$ 2 billion per year since 2010 for adaptation purposes.

She said the government has formulated a 100-year plan called ‘Bangladesh Delta Plan-2100’ as a long-term plan to face the challenges of climate change and natural disasters.

The PM said in the past decade alone, nearly 700 million people, half of the region’s population, have been affected by climate-related disasters.

“Before people can recover from one disaster caused by natural hazards, another one strikes, reversing any progress made. To end this cycle, South Asia needs to build greater resilience,” she went on.

Sheikh Hasina said Bangladesh is a unique example of climate vulnerability and resilience and the people here have time and again shown their resilience against natural or man-made disasters. “Yet, there remain a lot of things to be changed,” she said.

The PM said she thinks other countries in the region also have similar experiences and some good practices on adaptive measures. “I believe, together we can safeguard and build a better future for all of us,” she said.

“We’ll fight together and work together (on climate change adaptation) and we’ll achieve together our this goal,” she said.

“People around the globe know well that Bangladesh is the best example of successful case to tackle climate change and natural calamities and that’s why we’ve decided to set up GCA regional office in Dhaka,” he said.

The Dutch premier in his speech congratulated Bangladesh on being selected for establishment of GCA regional office, the first in South Asia. “It’s clear sign of Bangladesh’s leadership on climate change adaptation,” he said.

The GCA regional center is housed at the new building of the Department of Environment at Agargaon in Dhaka.

GCA Bangladesh will have both international and locally-recruited staff with some seconded officers from the Ministry of Environment, Forest and Climate Change.

It is expected that the headquarters of the Global Center on Adaptation in Rotterdam will support GCA Bangladesh through a matrix structure, acting also as the Secretariat of CVF and V20, two climate-based important international organizations under the chairmanship of Bangladesh.

In addition, the GCA will serve as a Secretariat of Delta Coalition to contribute to important works related to blue economy.

GCA Bangladesh will also support Bangladesh in preparing and contributing to the Climate Adaptation Summit on Jan 22, 2021 and COP26 in November 2021.

GCA Bangladesh will facilitate and develop on-the-ground action in South Asia to accelerate adaptation and address climate change vulnerabilities across the entire region.