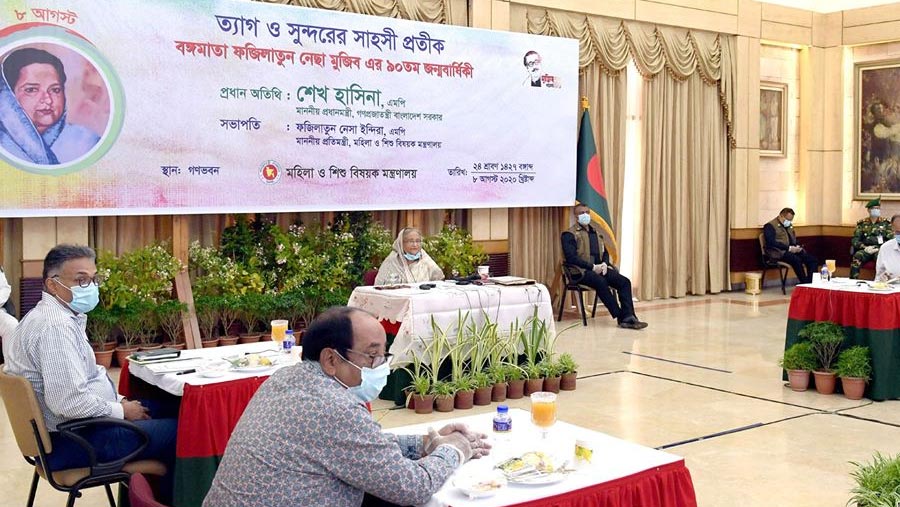 Mentioning that her mother Bangamata Sheikh Fazilatunnesa Mujib could have taken right decision in any critical juncture of the nation, Prime Minister Sheikh Hasina today said her (Bangamata’s) decision to reject Bangabandhu’s release on parole changed the course of the country’s political history.

“The most desirable thing regarding my mother’s contributions to the political arena was that my mother had taken correct decisions at the right time. But, I’m sorry to say many big leaders had failed to do it or approached the wrong decision at that time,” she said.

While addressing a programme marking the celebration of the 90th birth anniversary of Bangamata, the prime minister pointed out that she (Bangamata) had taken the right decision by turning down the proposal of Bangabandhu’s release on parole for holding a roundtable discussion (in West Pakistan) after putting her life at risk.

“That correct and timely decision had forced Ayub Khan to withdraw the (Agartala Conspiracy) case and changed the course of Bangladesh’s political history as well,” Sheikh Hasina said.

“She (Bangamata) used to guide the organisation with competence (particularly when Bangabandhu was in jail) and give right decisions,” she added.

Sheikh Hasina, elder daughter of Father of the Nation Bangabandhu Sheikh Mujibur Rahman, joined the programme organised by the Ministry of Women and Children Aaffairs, from her official residence Ganabhaban in Dhaka on virtual platform.

Speaking at the programme as the chief guest, the prime minister recalled that the Pakistani military dictators had tried to include Bangamata’s name in the Agartala Conspiracy Case for which Pakistani intelligence agencies interrogated her (Bangamata) several times.

“She (Bangamata) knew it and I as her elder daughter also knew it. But she never lost her courage,” the PM said.

She also said: “You might have realized what could have happened about the fate of remaining accused of the Agartala Conspiracy Case had her father Bangabandhu been released on parole as Sergeant Zahurul Haque, one of the 35 accused in the case, was killed under the captivity (of Pakistani military rulers).”

Turning to the historic 7th March speech of Bangabandhu in 1971, Sheikh Hasina said the speech was not written and he (Bangabandhu) did not rehearse it before the mammoth rally at the then Race Course Maidan.

“Before the speech, my mother suggested Bangabandhu to say whatever comes in his mind, and there was no need to pay heed to the points of others... to say about the history of oppression on the Bangalees,” the premier said.

Now today, she said, this historic 7th March speech of Bangabandhu has made its place into the World Documentary Heritage by UNESCO and it is also one of the greatest speeches of all times.

Mentioning that Bangamata had great efficiency in building up struggle and movement, Sheikh Hasina said she had a huge role in waging massive movements in favour of the 6-Point-Demand and against the Agartala Conspiracy Case as she knew how to create public opinion.

“My mother knew well how to drum up public opinion and wage movement through strengthening the party. Especially, she (Bangamata) had played the key role in waging student movement of that time,” she said.

Noting that her mother did not differ with any decision of Bangabandhu, the prime minister said that her mother (Bangamata) supported her father (Bangabandhu) in taking part in the 1970 general election though many leaders of his party were against the contesting the polls.

A documentary was screened highlighting the life and works of Bangamata.

The premier distributed Tk 26 lakh – Tk 2,000 each – among 1,300 distressed women thorough the electronic medium as per the enrolment of the beneficiaries provided by deputy commissioners of 64 districts.

Remaining connected from Gopalganj its Deputy Commissioner (DC) Shahida Sultana, on behalf of the Prime Minister, distributed 3,200 sewing machines among 3,200 women and 100 laptops among the poor meritorious students of the districts.

Born on Aug 8 in 1930 at Tungipara village in Gopalganj, Bangamata was brutally killed by the assassins of the Father of the Nation on the fateful night of Aug 15 in 1975.

Noting that Bangamata always stood beside the Father of the Nation, the PM said that Bangamata sacrificed her entire life going beyond her personal desires and demands.

“My father had gotten scope to work completely for the welfare of the country and its people as my mother never annoyed him (Bangabandhu) regarding the familial matters,” she said.

“My mother set an example for others in terms of sacrifice as nothing can be bigger than sacrificing oneself going beyond personal desires and demands,” Sheikh Hasina added.

In this connection, the prime minister called upon the womenfolk to nourish the ideals of Begum Fazilatunnesa Mujib in their lives to make a family, an organisation and the country as beautiful ones.

“My mother always used to encourage Bangabandhu in doing politics for the people and never cared about her own interests … she never thought what she would get in her personal life,” she said.

Sheikh Hasina reminisced that Bangamata even saved every single penny which she got from her father’s assets and handed over those to her husband (Bangabandhu) to do politics.

“Alongside looking after the family affairs, Bangamata used to take care of the families of the detained and ailing leaders and arrange their treatment,” she said.

Recalling the sacrifice of Begum Mujib in her whole life for the people of Bangladesh, Sheikh Hasina said, “Bangamata always led a simple life like the common people of Bangladesh and taught us it, even when Bangabandhu was in the office of the prime minister after independence.”

She said her mother never stayed at the Ganabhaban as she didn’t want that her children lead a lavish life, adding, “My father and mother had taught us to take steps looking on the ground instead of upper realizing the situation of those who were comparatively in bad situation than us.”

Mentioning that Bangamata stood beside Bangabandhu even on the day of his (Bangabandhu) assassination, the premier said, “My mother passed away as a perfect companion of my father... my mother did not beg for her life.”

“She (Bangamata) didn’t want to live, telling the killers with courage you had assassinated my husband and I want to go there and she was killed at that place by the assassins,” she said

The premier continued: “She (Bangamata) upheld the ideology of my father rightly and sacrificed herself bearing the same ideology. But, the anti-liberation force killed the noble lady brutally on the fateful night of 15 August 1975.”

Sheikh Hasina said Bangamata even used to serve the families of the detained leaders in their economic hardship, children’s education and illness when Bangabandhu was in prison.

“Bangamata, standing beside Bangabandhu, established rehabilitation centres for the women who were violated and tortured during the Liberation War,” she added.